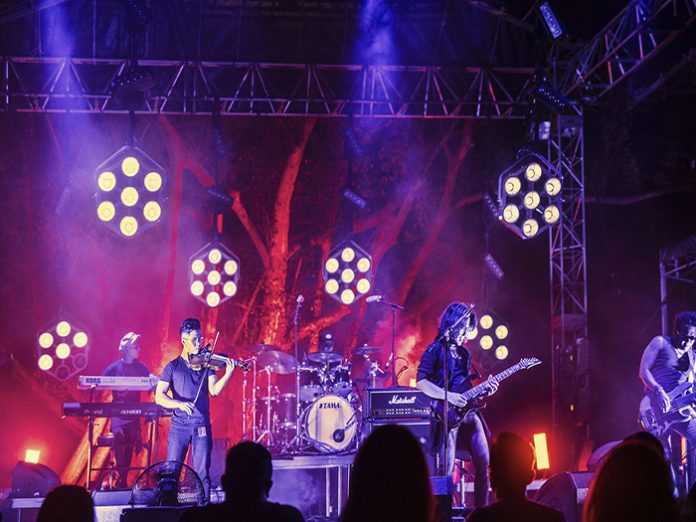 The Fort Gate at Fort Canning Hill in Singapore provided a stunning backdrop for the 2018 City 65 Music Festival, utilising a myriad of Robe lighting fixtures.

Craig Burridge was asked to coordinate the main stage production and lighting design for the 1-day event by organisers Michael Spinks and Rachel Mason from City 65 Music Pte.

The main stage line-up featured five diverse bands, three playing in daylight and the final 2 in the dark, for which Burridge used 50 Robe fixtures – 24 Linees, 10 ColorStrobes, 6 PixelPATTs and 10 LEDWash 600s – positioned prominently on the rig.

The venue is managed by the National Parks, and there are some strict rules and regulations designed to protect the environment. No production elements can be within 2 metres of any tree, so the 9 metre wide by 8-metre deep stage was allocated a space between two, right in front of a ‘heritage tree’ which “made a fantastic backdrop,” explained Burridge.

The 4-legged ground support was trimmed at 7-metres to maintain rectangular form to the stage, and 2 and 3-metre drop bars were used on the background support truss and 2-metre ones on the mid ground support truss, which enabled lights to be more dynamically positioned. Each drop bar was rigged with 2 Robe Linees and a Robe pixelPATT.

Three LEDWash 600s were on both the mid and front trusses, with 2 more each side on the downstage edges of the floor, utilised as the main band washes – 4 Robe ColorStrobes on the front truss made highly effective blinders and Burridge positioned two more on the ground behind the stage to illuminate the heritage tree and make it pop out.

Four 2-metre sections of the vertical truss on the deck were each populated with 3 Robe Linees and a ColorStrobe. The flown Robe Linees and the Robe pixelPATTs were all hung on 2m & 3m drop bars, and used for eye-catching effects.

Robe pixelPATTs were also placed to work as a stand-alone visual effect, rather than to light up the stage, and Burridge spent considerable time programming chases so they appeared to rotate or move left / right and up / down. They proved “great for the pastel palette looks I ran for one of the headliners”.

Burridge operated all the lighting himself using a WholeHog FullBoar3.
For third on the bill metal band Terminal Cry, who played in daylight, he chose all-white lighting with lots of beams created from this punchy selection of fixtures.

They were followed by co-headliners, neo-vintage soul band The Steve McQueens which were lit primarily in pastel shades. By now it was getting darker so the Linees and PATTs were used to fill the space with abstract flowing shapes that morphed and moved with the groove.

Co-headliners Addy Cradle closed the show with an intensive prog rock performance which Burridge lit with lots of saturated colours onto the tree and from the flown Robe LEDWash 600s, with the floor-based Robe LEDWash 600s contrasting in warm or cold whites, while the Robe Linees produced big asymmetric static looks interspersed with pixel chases and layers of different shapes.

The lighting equipment was supplied by Singapore rental company CSP Productions. “They were brilliant” stated Burridge, “really going the extra miles to get it all up and working when time was really tight”. Burridge had just one evening of on-site programming.

The event was a big success and generated lots of positive comments about the look and vibe. The general perception is that City 65 Music Festival is a local band festival that matches the production values of any of the big international festivals staged in the country.

“The Robe fixtures were a big part of making it look really outstanding,” concluded Burridge.