Starting in September, AED Studios in Lint will offer TV, film and event producers the opportunity to use a high-tech XR studio. Extended reality (XR) is the umbrella term for virtual reality (VR), augmented reality (AR), mixed reality (MR) and other immersive technologies. At the XR studio, the physical and digital worlds are perfectly connected, allowing for new, expanded and unique possibilities for audiovisual productions.

AED Group integrated several Roland products into this immersive setup including the VR-50HD MK II and the VC-1-DL. The compact yet powerful VR-50HD MK II Multi-format AV Mixer is used as the control unit for all streaming applications and to manage auxiliary recordings of the different cameras, as well as the audio controls. Ideal for this multifunctional environment, the VR-50HD MK II consolidates video switching, digital audio mixing, multi-viewer touchscreen control, and USB3.0 AV streaming and direct control of selected PTZ cameras into a single unit that’s simple to run.

The VC-1DL converter was chosen for its reliability and flexibility and is being used to manage the signals across the studio to the different monitors. The VC-1-DL not only allows bidirectional conversion of SDI/HDMI but it also provides frame sync and delay adjustment of up to 9 fields (4.5 frames) for audio and video independently.

Thierry Heldenbergh, Managing Director AED Display, commented: “The versatility of functions combined with the ease of setup (of the Roland products) is a true added value for this type of setups. We can easily offer streaming services, switch sources, manage sound and monitoring with a single device without any complexity. The VC-1-DL converters have proven to be an effective swiss-knife in setting up the many displays around the set.” 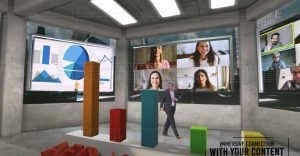 Glenn Roggeman, CEO of AED Group, added: “Using this technology, we can focus on a broad range of audiovisual productions. Here film producers can shoot special scenes and effects, television makers can create interactive sports and fiction programmes or shows with a virtual audience and companies can turn their most ambitious ideas into dazzling presentations or commercials. The possibility of ‘set extension’ provides us with a unique way of adding virtual images, effects or elements to the shot in real time and allows the people actually on set to be immersed in a total experience. There are only a few such studios available worldwide, and we are proud to also offer them in Belgium. Our customers will now have access to the same technology already used in Hollywood productions such as The Mandalorian, Nighthawks, Star Wars and others”.

The XR Studio is a partnership between a number of specialised European companies – AED Display, MalfMedia, AV Wizard, byLEX and Eurogrip – which fitted the Studio 4 complex at Lint with a high-tech XR setup. By using premium LED screens (floor and side wall screens), real-time rendering by powerful media servers, camera tracking systems and streaming facilities, the installation is immediately ready to use for interactive business presentations and for recording film and TV programmes.

Thanks to the cooperation of numerous partners who have the greatest expertise in every part of this project, the possibilities are almost endless. Film and television makers will have access to the best technology to make their production process more efficient and with fewer limitations. The events industry can take XR Studio presentations, meetings and product launches to the next level thanks to the fusion of reality and the virtual