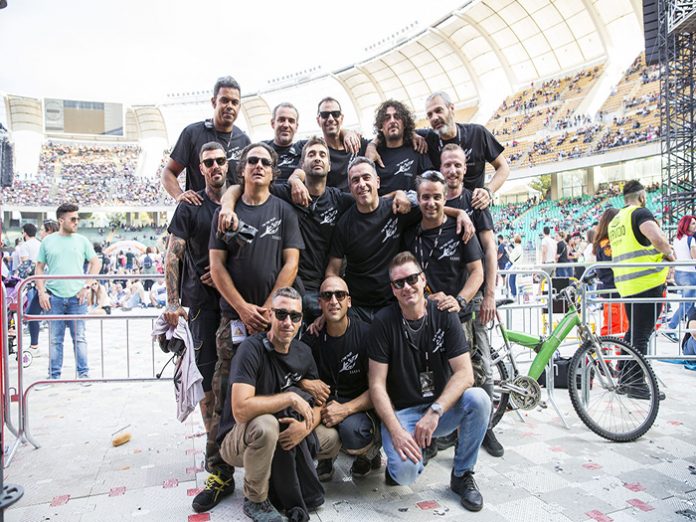 Lighting Italian superstar Vasco Rossi’s Non Stop Live 2018 stadium tour spectacularly was the artist’s long-term LD Giovanni Pinna, who included over 300 Robe moving lights on the rig – a mix of Robe MegaPointes, Robe Spiiders and Robe LEDBeam 150s – all supplied as part of the lighting package by Rome based lighting rental company, BOTW, and used to create plenty of excitement and hi-impact.

The starting point for the tour design for Giovanni and the Vasco creative team – was the show-stopping event in Enzo Ferrari Park, Modena last summer, Vasco’s one and only live appearance to celebrate 40 years of mainly-thrills-with-a-few-spills in entertainment … in front of around 250,000 people, the largest rock concert in Italy to date!

The Modena Park design presented a simple, bold, raw industrial looking set and both the artist and his management wanted a continuity from this. As a seasoned performer, Vasco is so charismatic that the enormous but essentially streamlined and Spartan look works brilliantly as a performance backdrop.

Lots of video and movement was right at the heart of this with a central screen 18 metres wide by 10 metres high (perfect 16:9 aspect ratio), with two 12 x 12 metre side screens … all three of which split into 2 horizontally to give some variation.

Over the stage were four 6 x 4 metre ‘satellite’ screens cladding the front of four trussing pods which were also rigged with lighting fixtures, and these tracked upstage / downstage and also flew up and down. With these and the splitting big screens, Giovanni was able to transform the stage architecture highly effectively with automation cues.

All the screen surfaces were 8 mm semi-transparent, and Giovanni positioned substantial quantities of lighting behind that could blast through, bringing a real 3D quality to the stage.

The set back wall at Modena was made up of scenic panels outlined with LED tape overlaid with a semi-transparent graphic image and the supporting scaffolding skeleton visible for additional depth, and for the tour, a re-scaled version of this was also present. In front of the panels were silver scaffolding pipes and lights were spread out across the whole expanse firing in from the back.

A series of trusses were installed over the main stage area, and above the side screens were box truss ‘pods’ for lighting, which was another detail that was initiated in Modena. The side pods on the tour were each rigged with 50 moving lights.

With Vasco’s show it was important that all the action was full-on from the first to last chords and that the energy could bounce off the stage, enwrap the supercharged audience and pull them into the vibes and emotion of the performance.

Pinna used over 550 Robe fixtures – he wanted to use just one type of profile or spot opting for Robe’s new MegaPointe, with 135 of the luminaires scattered all over the rig – above the stage, on the back wall and on the side pods.

It was the first time that Pinna had used Robe MegaPointes fully on a show, and they worked hard in every song of the 2.5 hour set! “I am really pleased with them it’s an incredible fixture,” he enthused.

Robe Spiiders were all deployed on the floor on this tour and were extremely noticeable throughout the show, creating great looks in combination with the top rig. “The huge zoom is an excellent feature and it makes them infinitely useful for this sort of close work on the artists.

A total of 8 Robe LEDBeam 150s on vertical poles were dedicated just to producing a more edgy style of low level cross and key lighting on the band and risers. Pinna used around 200 blinders, some of which also doubled as strobes. There were also additional beam lights scattered around as practicals and for filling in the back-of-camera shots for the IMAG mix.

A remote follow spotting system controlled around 30 luminaires dotted all over the rig, including front and side key lighting fixtures and both Robe MegaPointes and Robe Spiiders. Pinna used a trusty MA Lighting full-size console to run the show, and there was another one for the playback video.

The very talented and friendly creative team included video screens / content director and disguise server operator Marco Piva who was stationed at FOH and they worked very closely with live camera director Peppe Romano from Except to create the visual WOW factors needed to fill the stadiums. All have worked together for over 10 years on Vasco and other projects and share a noticeable imaginative synergy.

Set designer Claudio Santucci for set builders Gioforma has also been involved in Vasco tours and live shows for some time.

PRG provided the screens and the Kinesys automation system which was operated for the show by Jimmy Johnson, with movement also a vital element of the creative picture. PRG’s crew chief was Bart de Cleene and BOTW’s was Fabrizio Moggio. “Both have been fantastic,” stated Giovanni.

Lasers were from ER Productions, designed by Ross Marshall and the pyro and flame system was from Parente – the effects – fire and confetti – were also fired from the lighting console.

The audio vendor was Agora and the assertive and crystal clear FOH sound was mixed by Andrea Corsellini.

Everything was kept in order and running smoothly on the road by production manager Riccardo Genovese. The biggest challenge on this one was the gruelling schedule – with no days off and a large and complex rig.