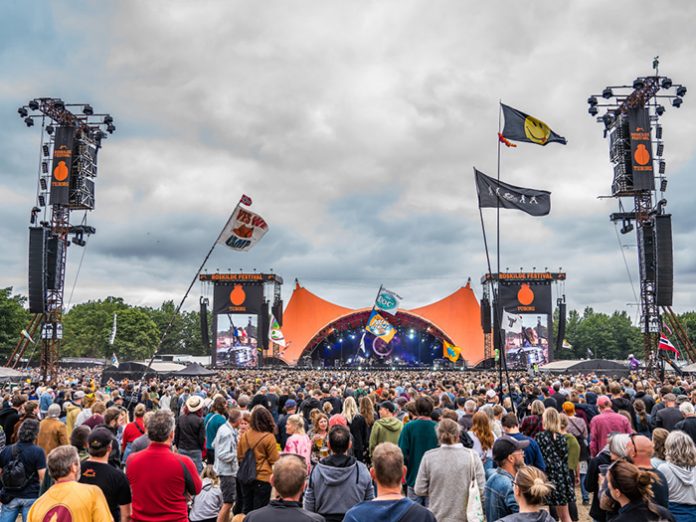 Thanks to its unprecedented partnership with Denmark’s Roskilde Festival, Meyer Sound realised a rare opportunity to make precision measurements on the effect of variable atmospheric conditions on concert sound reinforcement.

“For years we’ve heard speculation about how atmospheric conditions — including the presence or absence of the crowd — can change the sound at an outdoor concert by changing ambient heat and humidity,” said Schwenke. “And the conditions at ground level might be different than at a few meters higher up. Now we have confirmed that effect, and we have a trove of measurement data that will allow us to precisely quantify those changes.”

The measurements were taken during last summer’s festival at the 100,000-capacity Orange Stage, where a 257-loudspeaker Meyer Sound LEO Family system was deployed for headline acts that included Bruno Mars, Eminem and Nick Cave and the Bad Seeds.

The complete data acquisition system comprised a total of six measurement points for temperature and humidity, with five of the points spaced vertically at about three-meter intervals on a delay tower facing one of the main front arrays. Two of the measurement locations also recorded wind speed and direction. The sixth measurement point was over the delay arrays to assess any effect from heat dissipated by the amplifiers in the self-powered loudspeakers.

To capture audio from the front arrays, DPA provided five of their 4007 omnidirectional microphones (response from 10 Hz to 40 kHz). Using a SIM 3 audio analyser, the signals from the microphones were compared in real time to the direct signal from the GALAXY processor for the main array — as carried back to the test location via an AVB network backbone deployed at the Orange Stage. Results of the on-site signal analysis and correlated weather data are undergoing further study at Meyer Sound’s Berkeley headquarters.

The system was designed by Meyer Sound Senior Digital Product Specialist James Edmondson and was installed under his supervision by riggers using a cherry-picker provided by the festival.

Also participating in the effort were students from the Danish Technical University (DTU) who assisted in analysis of the test data. The student team was recruited and coordinated by Morten Büchert, the principal audio consultant for the festival, and DTU Associate Professor Finn T. Agerkvist.

“We know that sound can be affected by wind direction and velocity, and by changing temperature and humidity,” continued Schwenke, “but these changes are not the same at ground level as they are up 20 meters over the crowd. For the first time, we were able to accurately measure the atmospheric changes at five levels, and we found differences depending on the size and density of the audience. Now we are excited to analyse in detail the corresponding changes in the audio characteristics. What we are learning will help us further refine our system optimisation procedures for large festivals, and it will also have educational value in our training programs.”

Elaborating further, Schwenke notes that the comprehensive measurement set-up allowed the research team to isolate the variables that can contribute to variations in sound over a distance. “There are so many things that are going on at the same time. There’s atmospheric absorption, which is frequency dependent, and there’s the possibility of diffraction due to temperatures or humidity changes with height. All of these need to be taken into account when designing and optimizing a system. Sometimes it would be done with equalization, sometimes by configuring the system for greater vertical coverage so it’s more tolerant of diffraction. There are many possible solutions so it’s important to isolate the dominant effects before we choose which approach to take.”

Under a long-term partnership agreement between Meyer Sound and the Roskilde Festival, Meyer Sound LEO Family systems were deployed at all stages of the festival for the 2018 event. All systems were supplied by the Bright Group, Scandinavia’s leading event technology company. System deployment, configuration, tuning and operation involved a coordinated team effort on the part of Meyer Sound technical support, Bright’s own technicians, and a Roskilde Festival technical crew that had received special advanced training for their key roles in the event.