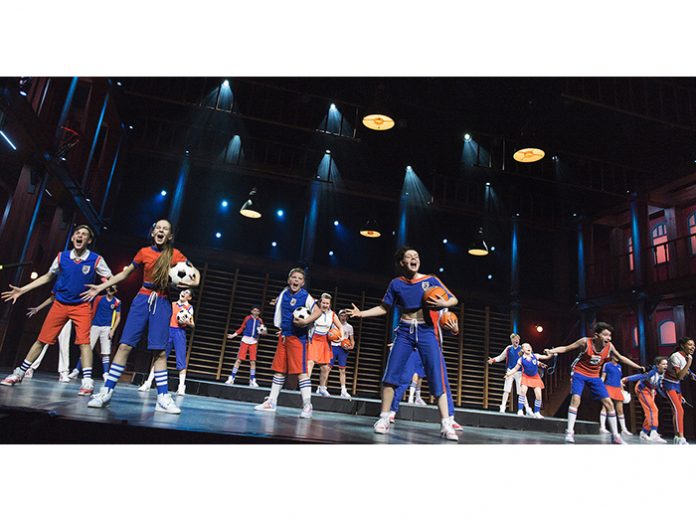 Belgian TV and stage entertainment producer Studio 100 called upon Painting with Light to design lighting and video, including content creation, for 2018 Ketnet (Children’s TV channel) musical Team UP, which played to sold-out crowds in 4 major cities around Belgium.

Painting with Light’s Paco Mispelters took Studio 100’s impressive double-decker set design as a starting point; featuring a complete first level balcony and a gymnasium-style climbing frame structure upstage, as well as a 10-metre diameter stage, revolve further downstage, which was used to play out specific scenes and to move props and additional set assets on and off stage.

Mispelters explained that the lighting challenges “included getting lumens into some difficult to access spaces and helping to create multiple locations”, including the school gym, the principal’s office, the technical closet, a train interior, etc.

A series of trusses were installed at each venue and used in conjunction with house fly bars. As the set was immediately beneath some of the fly bars, meaning that they could not come in low, ladder trusses were hung beneath selected bars allowing strategic positioning of fixtures that could light the side wings of the set.

Mispelters chose 15 Philips Vari*Lite VL3500 Washes as his general back and stage washes, and they were picked for their fresnel lens which “produces a nice softness to the light and is generally great for theatre shows,” stated Mispelters.

For hard-edged sources, he used 24 Claypaky Alpha Spot 1500 profiles. He needed a powerful fixture with shutters which were essential to creating some of the smaller and more intimate scenes that entailed closing down space.

To light the set pillars, he searched for a small, compact fixture and found the Briteq BEAMSPOT1-DMX FC, a very narrow LED source with interchangeable frost filters that proved ideal for the task. A total of 32 were used to pick out the 16 pillars, with one fixture positioned at the top and one halfway down the pillar; both down-lighting.

Precise lighting was also needed under the set balcony, using a source that would not produce lots of clashing shadows, so after a bit of research, Mispelters positioned 12 Chauvet Professional Épix Strip Tours – a 1-metre LED batten with 50 individually mappable LEDs in a row and a 125º viewing angle. He removed the standard frost filter on the front to attain more intensity.

Lighting was operated on the road by Arjan Grootenhuis using an MA Lighting grandMA2 light console, complete with an NPU in the system to assist with the channel management. This was ramped up in particular by the ÉPIX Strips, adding 600 channels alone to the mix, but well worth it to achieve the look everyone wanted.

Painting with Light’s team also designed the show’s video, which featured a 3 metre x 2 metre high LED screen that flew in and out throughout the performance, helping to create scenes and locations like a digital scoreboard for the sports competitions, a television in the principal’s office and views out of the windows on the train.

Mispelters, who also lit last year’s touring production Unidamu, concluded: “It was fantastic working with the Studio 100 team again – we really enjoyed some great synergy and there was a lot of scope to be imaginative with the lighting. I think we are all proud of the end result”.