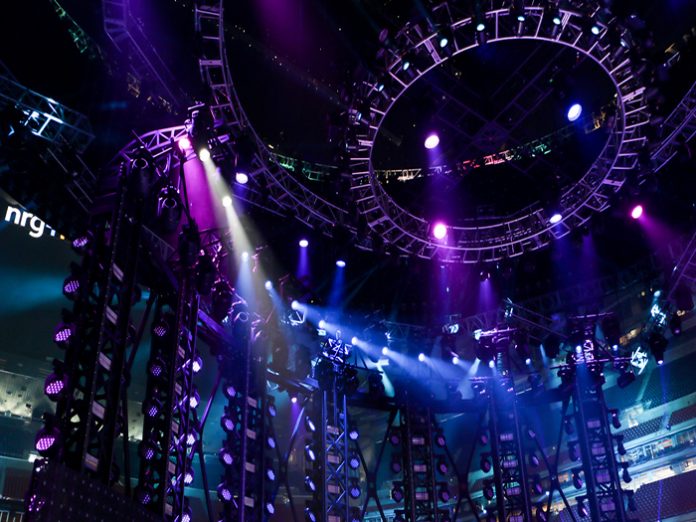 High End Systems lighting fixtures were riding high in the rig of RodeoHouston. LD Nathan Brittain specified 14 HES SolaSpot 1000s and 10 HES Sola HyBeam 2000s to meet his demands for lighting with an impactful kick while reining in power consumption.

LD Systems provided the gear for the nightly concert series during February and March at Houston’s NRG Stadium.

After each day of bull riding and mutton busting, with horses, clowns and kids kicking up the dust, the self-propelled stage steered itself to the centre of the arena for the evening’s performance with top name acts. This year’s new concert stage – designed and fabricated by Tait, with support from LD Systems – unfolded like a flower, revealing its five-pointed star shape.

Brittain positioned the SolaSpot 1000s above the backdrop video wall for rear key lighting to all the performers on the rotating stage.

“The SolaSpot 1000 was perfect for this application because it has a flat field with a great colour temperature,” Brittain said. “We needed something that wouldn’t draw a ton of power and didn’t have a huge profile,” he added, making note of the 20,000 lumens from its Bright White LED engine, as well as its lightweight, compact form. “We got a lot of use out of the CTO wheel as well.”

Ten of the HES SolaHyBeam 2000s – a hybrid wash, beam and effects fixture – were positioned on the overhead lighting system. The flagship SolaHyBeam can outperform even the most powerful 1500W arc-source instruments.

“We needed a fixture to widen our wash with this year’s larger stage, specifically to fill in the base of the star points. We were trying to keep our power consumption under control but still get the punch in a wash that we needed – even with the frost in and zoomed out a good bit. The HyBeam 2000 did this, plus provided some other fun features. Similarly to the SolaSpot, I love the colour temperature and the even field is great.”

Brittain was impressed with how both fixtures read on camera, and raves over their reliability in the rig. “They just work; I certainly don’t have to worry about them come show time.”

His concerns are further abated with High End Systems patented lens defogging system. Because LED fixture lenses do not get as hot as they do with arc sources, there is a tendency for theatrical haze to condense on the lenses – which results in loss of contrast when projecting gobos and aerial effects.

The defogging system prevents the condensation on all HES LED fixtures and keeps the beam and projected images looking sharp show after show.

For RodeoHouston, the lens defogger system performed as promised, keeping beams and patterns crisp and clear – despite the humid Houston weather, dust in the air and crowds breathlessly cheering for the broncs and the bands.

The lens defogger was a big consideration in LD Systems’ equipment purchase. “We considered the lens defogger when deciding to purchase the HyBeams,” Brittain notes. “For the year we have had the SolaSpots, we feel like the lens has remained very clear despite pretty heavy use.”

Heavy use is an understatement. This year, five of the RodeoHouston concerts each roped in more than 75,000 fans at NRG Stadium. Garth Brooks opened and closed the concert series, with total nightly attendance hitting 1.36 million for this year.