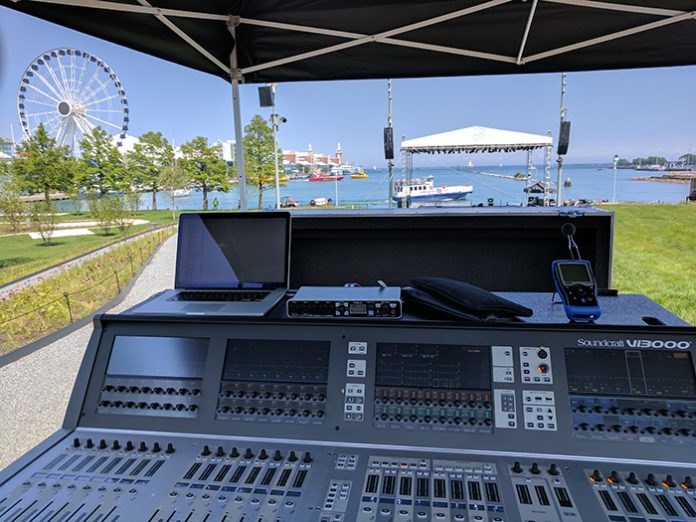 Located on the shores of Lake Michigan, Navy Pier is one of the city’s biggest tourist attractions, both in popularity and size. As part of a comprehensive redevelopment of the entire Pier, management decided to install a permanent audio system for the newly-created Polk Bros Performance Lawns, a free outdoor concert space designed to host artists from Chicago’s vibrant local music scene, as well as occasional touring acts.

Navy Pier has relied on Harman audio solutions for more than a decade, so when it came time to design the new system for the Lake Stage and City Stage, the Pier hired audio consulting firm Threshold Acoustics to design an all-HARMAN audio solution based around JBL Professional VTX V20 line-array loudspeakers.

“We needed a line-array system that was highly controllable so that we could manage its impact on the surrounding area,” said Jason Kartak, Senior Consultant at Threshold Acoustics. “There’s a housing development nearby, and they wanted to make sure that the noise from the shows did not disturb its residents. There had been noise complaints in the past, so that was something we had to look at very carefully with the design.”

The system is comprised of 2 main hangs of 12 V20 loudspeakers, 6 JBL VT4886 line-array loudspeakers as front fills, 2 delay towers equipped with JBL PD6212/95-WRX loudspeakers, and 6 JBL VTX G28 subwoofers deployed on the ground. The system is powered by a pair of Crown VRack amplification systems loaded with Crown iTech 4x3500HD amps. Both the FOH and monitor positions feature Soundcraft Vi3000 consoles and a BSS audio processing system that contains a BLU-806 processor and BLUDIGITAL IN and OUT cards.

In order to minimize noise for the nearby residential areas, Threshold and OSA took advantage of the topography of the venue—specifically a raised berm at the far end of the audience area. By aiming the V20s into the berm rather than over it, they were able to reduce how much sound escaped. However, the restricted directionality left some areas without optimal audio coverage, which necessitated additional speakers.

“We included a pair of delay towers with JBL PD6212/95-WRX full-range, two-way speakers just to cover that little area in the back because we didn’t want the line array shooting over the berm,” said Brandon Gardner, Account Executive and Project Manager, OSA. “That would have caused the high frequency and other energy out further into the city and farther than the Pier.”

Another challenge facing Threshold and OSA during the short design phase of the project—they began work in April 2017, and the first show was in July—was the size and weight limitations of the light poles that serve as towers for the line-arrays.

“The VTX V20 boxes enabled us to meet the weight and height restrictions and still provide excellent quality,” Gardner said. “When we calculated the quantities of boxes required for the power and pattern that were needed to cover the space, and factored in the architectural limitations, the V20 system was the perfect solution.”

“Finally, the Navy Pier wanted the system to be portable so that it could be taken down from the Lake Stage and moved to other locations like the City Stage on the other end of the lawns when necessary. One of the solutions OSA and Threshold came up with was to tie into the Pier’s fiber-optic network and put the amplifiers in a central location, accessible from anywhere in the entire facility.

“We used traditional V-Racks in the rack room and integrated them with the entire system and all the existing BSS pieces,” said Gardner. “We provided a Blu-806 that interfaces with the new system, but also has a fiber tie line using BSS MC-1s from the Pier itself to our remote equipment closet. The tie line to our equipment rack enables the system to interface seamlessly with the Pier’s entire audio infrastructure, and allows the Navy Pier’s audio staff to quickly configure the BSS network.”

The Lake Stage has been a popular success since it opened, and OSA’s HARMAN Professional Solutions system has succeeded in delivering high-quality sound without causing noise issues with the neighbors. Chicago now has a second free public music venue—along with the one in Millennium Park—where people can go to hear a wide variety of music in an outdoor setting.

“Chicago values its music,” Gardner said, “and the Polk Bros Performance Lawns are another excellent location where everybody can go to hear it.”