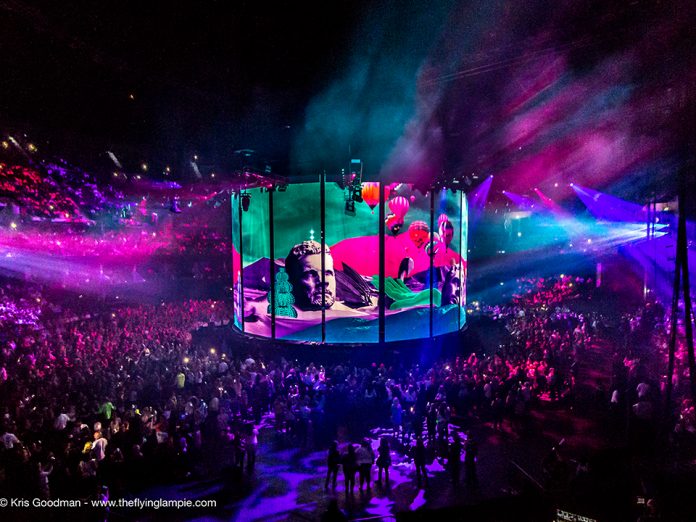 A visit to Wonderland, that is the promise of Take That’s latest tour; a phantasmagorical ride through a vividly imagined and ever changing landscape. For an in-the-round (ITR) performance this is as complex as it gets. “Data wise it is massively integrated,” said lighting designer Tim Routledge with stark precision. “The stage is based on the familiar logo of two T’s one inverted atop the other within a circle defined by LED floor panels. Above, a 20-metre diameter truss contains an all-enveloping ring of sixteen roller-drops where we present some truly dazzling video projection.”

Conceived by the band’s live show Svengali, Kim Gavin, with a collaborative team that comprised no less than Stufish’s Ray Winkler and artistic director Misty Buckley, it is in the realms of video, all provided by Video Design, where some of the most testing conundrums have been solved, as Routledge described.

“The roller-drops use a fantastic fabric from Showtex; white fronted it has a black back that almost totally eliminates any pass-through light from the projectors. Video Design provided four projector stacks; figuratively speaking placed North, East, South and West out in the grandstands. The roller-drops are all Kinesis controlled so we can precisely choreograph their movements and positions. For example, they can run up/down in a sequence evoking a sine wave around the rig. Or they can be lowered just 30% and used solely for an IMAG narrow portrait banner around the top of the stage. There is a second set of fourteen rollers in the centre stage area, these flank the sides of stage lifts that define the two T’s and rise six metres out of the stage.”

Managing such a variety of moveable projection surfaces is but the least of the challenges. “The first thing before we do anything is calibrate the venue,” continued Routledge, “something easily done with BlackTrax once the cameras are in position. The difficulty is this: Imagine you have a moving target, say one of the three principal performers. As they move around within the confines of the double T there are big projection surfaces at right angles to each other. That increases the potential for shadows from follow spots within that space; so, I control all follow spots using BlackTrax. If that projection scenery is also changing position it gets even more complex. To manage the ‘projection’ and ‘no projection’ areas would be impossible manually.”

Luke Collins, from Video Design explained the solution. “I have 32 projectors in total, eight at each compass point, twenty-four active and eight hot backups. For the D3s to mask and map accurately to the moving screens we take the Kinesis data so it tracks all movement in the horizontal plane. The BlackTrax data is critical to get the positional difference between the inner and outer roller-drops, and the vertical edges of all the rollers. You might think those positions are set, but there is inevitably variation venue to venue, so with the BlackTrax data I can then move the screens (virtually) relative to the projectors within D3. That will probably be just a few millimetres but it’s important to ensure there are no ‘off roller’ bleeds. The last thing Tim needs is slivers of really powerful projection slicing out into the audience.”

Production Manager Chris Vaughan went to great lengths to ensure such complexity could be toured and properly realised. “All the creative contributors have had to engage with the ITR aspect and recognise what that entails,” he said. “Not just for their own considerations, but how achieving their goals interacts with the other departments. Hence, it’s been hugely collaborative. To plan for this, we took a 20m-diameter truss out to all the booked venues and flew it in the central position. Then me and Alex Leinster (Video Design), looked at all the possible projection positions for each corner, minimising seat kills and at the same time ensuring there would be no compromise to the projection. In that sense, Video Design are doing what is potentially one of the greatest projection shows ever attempted in the live arena in the round. One that is bright enough to read well – and let me tell you it looks fantastic – and yet not kill every seat in the grandstands. That’s a notable achievement.”