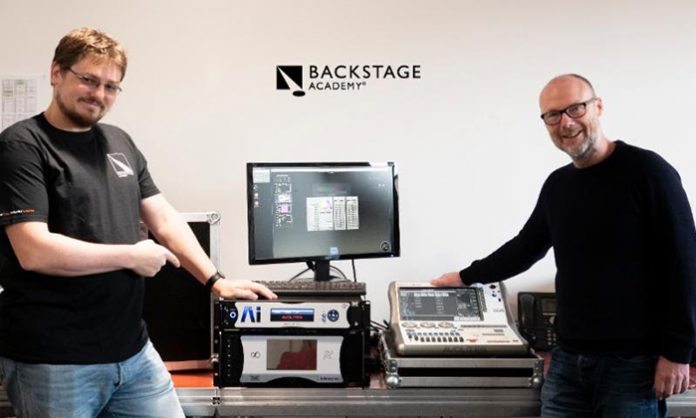 It’s the latest in a long line of deals between Avolites and education hubs that showcase the company’s support for the next generation of creative lighting and video designers.

Backstage Academy now offers hands-on education with Ai Q3 and RX8 servers, Quartz and Tiger Touch II consoles and a variety of networking and power equipment. The Academy, which is renowned for equipping its pupils with essential, real-world live entertainment skills, will be using the Avolites machines for the entire academic year.

“It’s vital that our students learn their craft using the latest media and lighting control equipment so that they are prepared for employment in this fast-moving industry,” says Sara Gleadhall, Director of Business Development at Backstage Academy. “Having such hot-off-the-press media servers like the Q3 creates a buzz of excitement, allowing our students to manipulate visuals with total creative control.

“The fact that a highly-regarded company like Avolites supports our students goes a long way to validating their studies and recognises their commitment to learning and their future in the live entertainment industry.”

The Q3’s powerful 4K playback, in-built live effects engine and Notch integration will be used across the all of BA’s courses, including Live Visual Design and Production, and Live Event Production.

“Students have always pushed the boundaries when it comes to technology, and so has Avolites, making a great match,” said Avolites’ Koy Neminathan.

“The Ai software has gone from strength to strength. With its new UI, the students will experience a clear workflow which will allow them to get creative when programming. The features of both Ai and Titan offer power and flexibility and having Ai and Titan under one roof will allow them to see the strengths and benefits to Synergy – the ability to connect and configure an Ai media server from the Titan interface.”

Avolites is also providing training for Backstage Academy tutors at their London HQ and student masterclasses at the Wakefield site.

“We will always be on hand for the students. It is important that they have the ability to not only to learn Ai and Titan but also understand how to create a network with our products, so they can take full advantage of features such as Multi-User,” Neminathan continued.

“Ultimately, we want them to have the tools they need to be creative; for their heads to be looking up at the stage rather than down at the console all the time.

“We’re excited about this relationship and we are looking forward to a long-term partnership with Backstage Academy. I’m sure, whether the students are patching a light on an Art dimmer, programming a show with 64 universes with the Titan Net Processor or projecting onto a 3D surface using our Ai software, they will have fun while being inspired.”

Gleadhall concluded: “We’re extremely grateful for Avolites’ support. Without this relationship, we couldn’t achieve such high standards of training and visual control.”