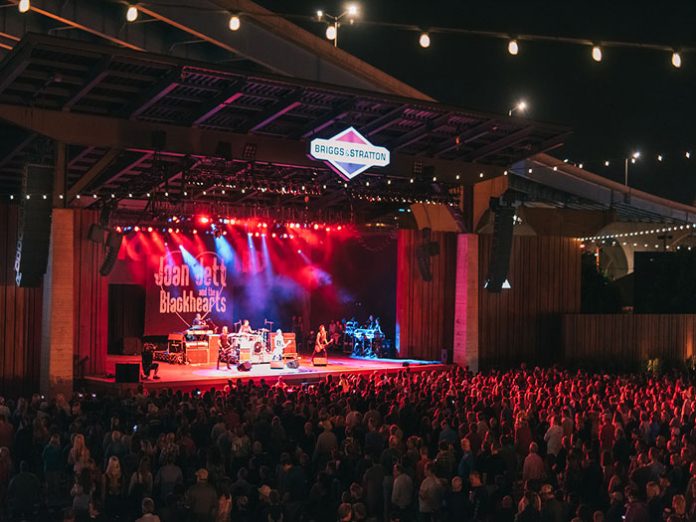 “We needed a system that could deliver high quality sound to a large audience of 8,000 people while keeping the coverage extremely focused,” said Bryan Baumgardner, Operations / Logistics – Audio at Clearwing Productions. “Stage-to-stage bleed is always a concern at outdoor festivals with multiple stages, but especially at Summerfest as most of the stages are in very close proximity to one another. The VUE system sounded fantastic with smooth, even coverage throughout the Briggs and Stratton Big Backyard stage. We were concerned about keeping the low-frequencies contained while delivering all the bass impact we needed, and with the VUE system and Jeff Taylor’s expertise about the hs-221’s and the Extended Low Frequency (ELF) mode, LF was never an issue in that tent.”

Baumgardner was so impressed with the VUE system that they are looking into permanently adding them to Clearwing’s rental inventory. VUE is excited about its new relationship with Clearwing, adding the Milwaukee-based business to its portfolio of well-known rental companies across the country. Summerfest was the perfect festival setting for VUE to exhibit the al-12 to engineers who traveled across the country to see it.

“The al-12 allows VUE to handle much larger applications than we’ve ever been able to do before while maintaining the same level of sonic performance for which we’ve become world renowned,” Ken Berger, VUE Audiotechnik CEO, points out.

“At Summerfest, we had time to listen to the system and I had a really good desk to play with,” said Ruwan Karu who mixed for Jack & Jack. “During sound check, I walked around and there was a really good spread. I didn’t want to make it too loud because the venue isn’t deep and I was looking for clarity and could tell straight away, with the drum kit, that there was going to be plenty of punch in the bass.”

Michael Larcey, Cleveland-based FOH Engineer for O.A.R, also had praise for his experience with the system. “It was clean and neatly rigged,” he stated. “It definitely had powerful low end – tight, no flabbiness – and my mix came together quickly. It was an easy day, I’ve got to say.”

“Jason Pruzin was the Front of House Engineer and Megan Henninger was the House Monitor Engineer for all the bands that did not bring their own engineers, and both absolutely loved the system,” Baumgardner added. “The al-12 just makes everything bigger sonically, while keeping all the high-fidelity sound we’ve come to rely on from VUE. I would have no problems whatsoever putting VUE gear on any of our other events. Everybody absolutely loved the system. We had so many compliments. I didn’t hear a single negative thing. The FOH engineers loved it, the monitor engineers loved the wedges and side fills, and the systems sounded really good, very smooth.”