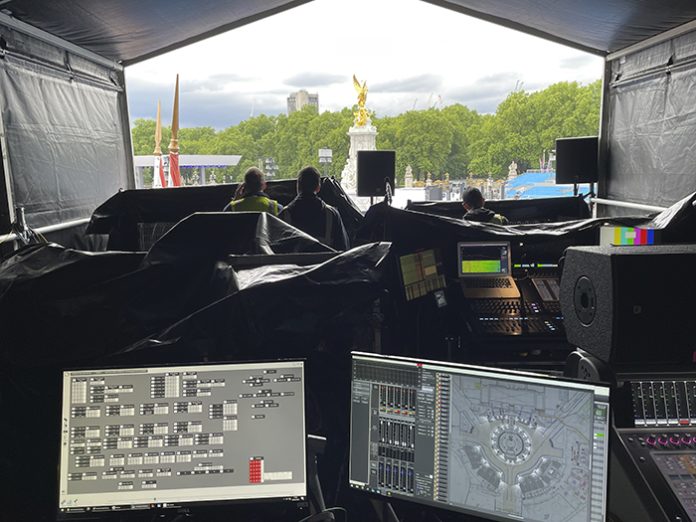 Sound designer Ben Milton, of Ben Milton Associates, instinctively knew TiMax SoundHub would be at the core of his complex sound design for the televised Queen’s Platinum Jubilee event, staged around the Queen Victoria Monument directly outside Buckingham Palace, with two end-on stages, North and South radiating outwards from the palace railings, a smaller Palace stage positioned between them in the palace forecourt, plus the main central QVM stage at the front of the Victoria Monument.

Milton explained, “To accommodate the four key stages, four different environments needing to be imaged, allowing me to apply multiple delays to each single source and provide super clean audio from a broadcast perspective, there was only one way I could go and that was with TiMax.”

The event was produced by BBC Studios via trusted broadcast sound supervisors, Kevin Duff and Andy Deacon of Zen Broadcast and the staging concept was designed by Ric Lipson of Stufish. Britannia Row Productions supplied the audio system.

Milton took TiMax SoundHub as the starting point of his audio design because of the spatial audio engine’s ability to natively simplify an audio environment, delivering multiple audio sources to any system of loudspeakers then facilitating its regeneration into an ideal listening environment. He added, “With TiMax, we were able to redeploy every loudspeaker with an individual time on it so they would image back to where it was coming from, and the performance would stay locked in musically.”

A matching pair of 64-channel TiMax SoundHub delay-matrix spatial processors were supplied by TiMax manufacturers Out Board, ensuring redundancy for the high-profile event broadcasting live to air. Milton’s initial design accommodated what “…became four events, all very different in concept, and each using the audio department’s timecode output to trigger every other aspect of the shows, from lighting, projection mapping and even drones.”

A multichannel distributed L-Acoustics sound system served the four grandstand seating blocks opposite the stages, and around the main QVM stage. All stages were mixed and controlled via a Digico consoles, bussed through to a master Digico Quantum SD7, then bussed via Dante and AES to TiMax, where the final mix was distributed via Dante over fibre to the pre-imaged and delay-matrixed loudspeaker positions.
Having not had his hands on TiMax before, Milton worked in a few trips to Cambridge to meet with Out Board director Robin Whittaker, who also spent several days on site helping to bed in the final set up pre-show. What amazed Milton was the accuracy of the transfer from his offline design to online.

Milton confirmed, “We had a two-day on-site set up period and TiMax transferred perfectly. The top of The Mall is a huge area and TiMax delivered a system perfectly in time, which is just amazing. We had a functioning system on day one and went straight into orchestral rehearsal day two. Incredible!”

Milton concluded: “Not only was it a great honour to be involved in this historic event, but actually, what we discovered – Mark Edwards, my system engineer and I, is that TiMax is the way you should approach any show, even if you’re not using it for 3D spatial placement. The ease of planning the pre-production which you need on your system before getting onto site is second to none. You can accurately time your whole system before you’ve even walked into the venue.”