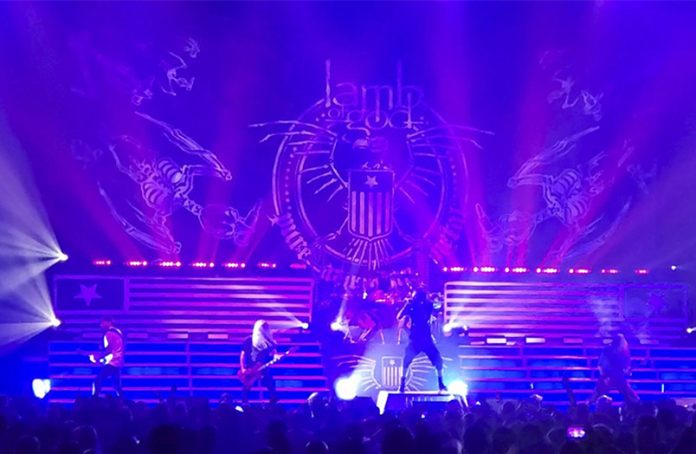 Lamb of God have been on four tours over the past year as support for thrash metal band Slayer’s long-running farewell tour, the latest beneath a rig of Elation lights.

Lighting design was by Steve “Cowboy” Stemac with lighting supply and support by Gemini.
Stemac started with Lamb of God in May of 2018 as lighting director, inheriting a stage set-up designed by tour manager Brian Griffin. After earning the band’s, and Griffin’s trust over the following legs of the tour, the designer began to evolve the show, a process that eventually led to fixture changes.

For the latest leg, a 16-date trek across the southern U.S. states and up the east coast, Stemac chose to reinforce the band’s signature sound and stage presence using Elation DARTZ 360 LED beam/spot fixtures and Elation ACL 360 Bars.

“Lamb of God like a lot of backlighting with not too many revealing hues,” Stemac said of the type of lighting required for the Grammy-nominated veteran rockers. After respecting their parameters, he says he simply approached it as a fan, asking himself, “What do I think would look right for this song?”

As direct support for Slayer, and following death metal act Amon Amarth, who Stemac said had a formidable lighting package, the LD strove for differentiating the show from theirs as much as possible, while still keeping it appropriate for Lamb of God’s music.

“On top of that, I had to keep an eye out for Randy as he’s a terrific frontman and I didn’t want him drowned in shadows,” he said. The band consists of vocalist Randy Blythe, guitarists Mark Morton and Willie Adler, bassist John Campbell, and drummer Chris Adler.

In addition, as the run played amphitheatres and arenas, the designer says he also wanted to create enough of a spectacle for the people in the very back. “So for this particular run, I worked on balancing all those factors and, hopefully, the fans responding thought it was cool!’”

The design called for fixtures with a linear beam across the top threshold of the set in what the LD calls the showcase position. “On the first run, we used Elation Chorus Line 8s, and although I really like the Chorus Line series and used them on other tours, I knew we could add some lateral movement, so swapped them for ACL 360 Bars,” which Stemac said has continuous 360-degree pan and tilt rotation.

Fourteen ACL 360 Bars worked from across a backline and there were times when the designer says he “made them sweat.” He comments, “The ACL 360s were the heart of the eye candy, so I had them in extended mode and as the show progressed I became more detail-oriented with them, even down to the individual LEDs. I created big fanned looks, aim-for-the-sky looks, and mystique-behind-the-band looks as well, almost like a wash.”

Stemac placed eight DARTZ 360s in the setup, four in the corner points of the set piece, and four in the middle by the drum kit for maximum swing and centre focus and to maximize cross beam looks. “The DARTZ, also in extended mode, were the punctuation, with the first half of the show in pencil beam lines and the second half running through every prism look they can give.”

In one of those prism looks, in the song “512” where guitarist Mark Morton goes into a blistering solo, “through a heavy red wash I backlit him with the DARTZ in their rapidly rotating 8-facet prism mode,” the LD said. “With their positions coming from different parts of stage left, it really accented Mark and the solo.”

In another impactful moment during the last song of the set, “Redneck,” a frantic riff after the second chorus kicks off a double-tempo middle-eight verse.

“I took that as the last moment to really thrash: the ACL 360s are popping up and down, with chases across their individually coloured LEDs, and the DARTZ are zipping back and forth with a move-in-black in between. It was my moment to spur those little robots into a workout, and the look wouldn’t have worked without those fixtures.” Stemac adds that he utilized the high speed of both fixture types heavily.

Dallas-based Gemini served as lighting vendor for the run, a production house that has emerged as perhaps the top provider of entertainment technology for metal tours in the US.

“I can’t say enough about Jason Cain and Gemini and their support,” Stemac said. “This has been the fourth time I’ve worked with them, and each time gets better. They are so attentive – without being intrusive and genuinely care about the gig being artistically successful. They are so good to work with, including the tour personnel.”