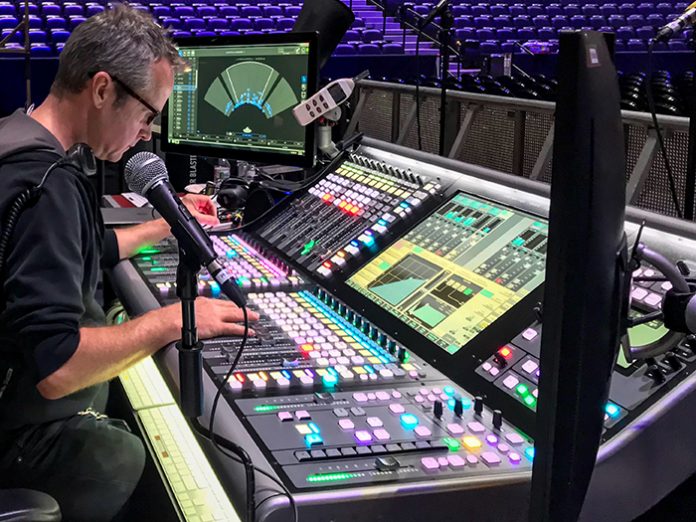 Singer, songwriter, and record producer Lorde has been out on her international Melodrama tour, which accompanies the new album of the same name.

The show is also set to visit some of this Summer’s biggest festivals, and front of House Engineer Philip J Harvey has been along for the ride, with the special honour of engineering on the first international tour on the road with the new L-Acoustics L-ISA Live multichannel immersive technology. To complement this, Harvey needed a console that could do justice to the band and L-ISA, so he chose SSL Live.

The stage set-up is relatively simple. An acoustic drum kit, guitar amp, and vocals are the main analogue sources, with two keyboard stations and triggered drum samples making up the rest. “It’s a nice, quiet stage,” said Harvey. “As the majority of the inputs are the Keyboards, software synths, and playback… I have 34 inputs from stage, plus clicks, guides, and so on.”

The L-Acoustics L-ISA Live uses multi-array ‘scene’ technology to distribute up to 96 objects (console channels) across the full width of the performance space in either ‘Wide’ or ‘Focussed’ deployments, depending on the show requirements. Object panning is taken care of by the L-ISA system, as is spatial configuration and 3D processing – using the L-ISA Room Engine. “The L-ISA goal is to widen the venue sweet spot by expanding the mix over the entire floor, using multiple hangs,” explained Harvey. “Each input is sent post-processing, post-fader into the L-ISA processor and each one shows up on the L-ISA controller as a dot that you can position as you want – like mixing via coordinates.

“The clarity you get with single source coming out of single point across the front of the stage is amazing.”

The SSL L500 Plus that Harvey uses at FOH was supplied by Firehouse Productions based in Las Vegas and New York. “I love the sound of that desk so much,” he said. “I went with the SSL because I knew that was where I’d be happiest with the fidelity.”

Harvey uses the SuperAnalogue preamps in the SSL stageboxes, shared between FOH and monitors to bring pristine audio back to the console input channels. Much of the processing is done in-line in those channels using the SSL’s internal FX rack and a Waves MultiRack system, with the addition of a few stem groups for specific FX. He then balances the mix on the console, sending the post-fader channel and stem outputs directly to the L-ISA system processor, which takes care of panning, depth, and associated processing. Harvey: “There’s no bussing at the console, which has turned my 23 years of knowledge on its head!”

Harvey has been constantly experimenting with the system and the SSL console combination since the tour began and notes that working this way has focussed a lot of attention on the sheer quality of the sources, the signal path, and the processing – rather than architectural and operational details. “The clarity I’m getting is magnificent,” he says. “Early on we did a show at the Staples Centre in Los Angeles with lots of invited audience. After the show, everybody asked how we’d got such an amazing sound in the Staples Centre.”

Lorde has a relatively straightforward vocal chain because, as Harvey explains: “She is a strong singer and delivers a lot to work with.” After the SSL Stageboxes, she has the channel EQ and dynamics, including the SSL De-esser, then onto a couple of choice Waves plug-ins, before returning to the console ready for direct output to the L-ISA processor.

Harvey also makes use of console delays for instruments, drums, and vocals: “Really, the most important thing about the console is the way it sounds. The pre-amps, the dynamics, the EQ. I particularly love the tube emulation on the compressor, especially with drums… Using the slow attack and fast release with the tube button in really makes the drums sing.”