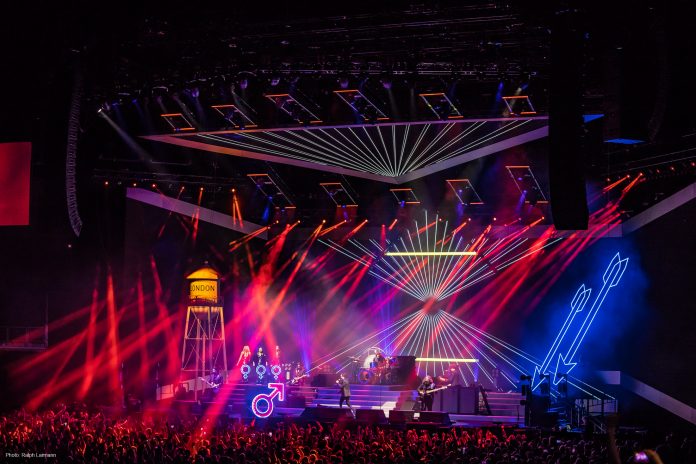 The latest incarnation of The Killers’ stage set owes much to the band’s Nevada heritage. As the band originally emerged from 20th Century Las Vegas, the design reflects an image of the small towns that straddled the American West.

Long-time Killers LD, Steven Douglas explained the process: “Our set designer, Josh Zangen from Fireplay had already put in place a large water tower stage right that harked back to the original look of the small American town and we felt something was required to balance that look on stage left.”

“We talked about something that was reminiscent of old Las Vegas signage and casino awnings. Josh came back with the initial drawings of large lit arrows pointing at a downward angle; the band loved them.”

The design was put out to Jon Perry of Perry Scenic who, in turn, subcontracted the project to Specialz. The company MD, Dave Smith filled in the gaps: “We were sub-contracted by Perry Scenic to design and manufacture 4 lighting trays with conventional E27 GLS 40W bulbs and edge RGB LED lighting to the periphery of 2 scenic arrows measuring 19’ 4” / 6M and 16’ 5” / 5M respectively. With efficient transportation and ease of rigging in mind, we opted to split each arrow in 2 with each of the 4 sections having a 6-circuit mains Socapex input and an RGB LED input.”

The choice of the light source was down to Douglas and Zangen. “Using conventional 40W GLS bulbs may seem a little old fashioned but it was a very deliberate retro choice,” commented Douglas. “Again, it all harks back to evoking an older, certain faux glamourous feel of old town Las Vegas; the light source from an almost forgotten era and then the edging with the RGB LEDs to giving them that slightly glitzy Vegas feel and the sleeker lines of the new casinos that have sprung up in the last decade or so.”

“We were pretty clear about what was needed to complete the brief,” continued Douglas. “We chatted with Specialz about different brands of products and the kinds of effects we wanted to create with the lighting on the arrows. They had no problems delivering exactly want we wanted.”

The result is 2 arrows of slightly different proportions, containing 257 bulbs and 158 respectively. These are shatter-shielded to protect them from accidental damage, on stage or in transit, and to protect anyone working around them. The 6-circuit wiring allows for various chasing patterns and looks. For the edging, RGB LED is laid into a pre-formed channel, then faced with a silicon diffuser to give a non-neon effect and is driven by 2 Specialz DMX driver packages.

Designer Zangen’s vision was complete; a couple of set pieces that are a permanent fixture on stage throughout the show, so how does Douglas make use of them? “The arrows are an integral part of the set; the design is tied in with other pieces on the stage; for example, the side metalwork trim matches the keyboard stand that is the downstage centre. We rig them from a small mother grid with inverted motors with thin steel cables to enable us to get the pointing angle of the arrows just right. They are utilised on and off throughout the whole show.”

“Aside from the look and performance of the arrows, which we are really happy with, the ease with which they can be flown and the fact they simply drop into 4 flight cases on loadout and wheel away is brilliant. We will definitely continue to use them for this album cycle and as we move into the festival season, they will be part of our stage wherever and whenever it is logistically possible as they establish The Killers ‘look’. As for the future, as they are a non-specific item, I can foresee they will continue to be employed in one guise or another.

“Our relationship with Specialz is a fairly new one,” concluded Douglas. “These arrows were pushed out to them by Perry Scenic who they felt would be the best people to build them and they were not wrong. We would have no hesitation in using them again.”