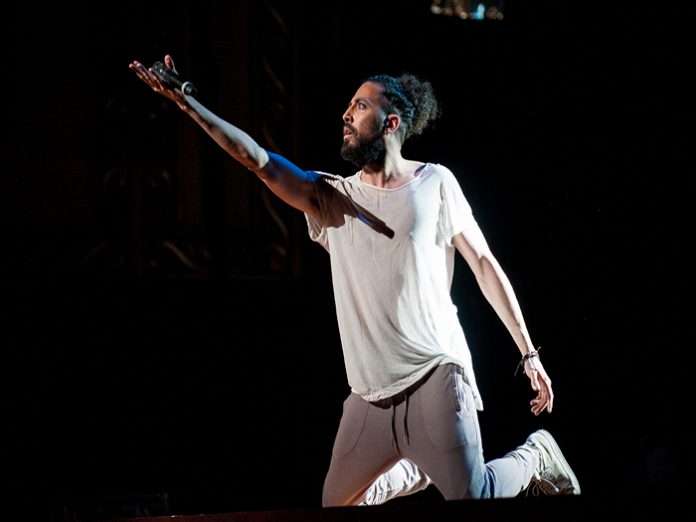 Nick Lidster, the Sound Designer from the creative team at Autograph that staged the show’s revival in London’s Regents Park, worked with senior sound engineer Peter Wiejaczka of OSA International to create a viable rock-based musical within the challenging acoustical confines of the Lyric Opera House. They opted to work with Shure Axient Digital as the primary wireless system for the production.

“This production was quite a significant step up from the show we’d done in London, going from a cast of 27 to needing over 50 radio microphones,” says Lidster. “We had the opportunity to work with Shure’s latest product, Axient Digital, including factory support here in its hometown of Chicago, so we were happy to do that.”

For Jesus Christ Superstar, Lyric Opera used a total of 56 channels of Axient Digital, plus 18 channels of UHF-R. All but eight transmitters were bodypacks. Of particular note was the inclusion of ADX1M Micro-Bodypack transmitters, important for the adaptive internal antenna, which automatically optimizes RF output when worn against the body. ADX transmitters also enable Axient Digital’s frequency diversity and ShowLink remote control features. Still a few months away from general release, Shure made 12 beta- test production units available for the show.

Stephanie Farina, a Chicago-based theatre tech who worked in the A2 role on the production, was very impressed. “The system being digital is a big help, because you can fit more frequencies together without intermod,” she noted. “We did need to do a little work with creative antenna placements to get full coverage with a steel set in such a large space, but once we did, we used Wireless Workbench software together with some old school methods and ended up with a solid frequency plan, including 16 backup frequencies. Not bad for downtown Chicago!”

Farina was also responsible for micing the performers, which is where the ADX1M made a strong impression. “With no external antenna, I was a little sceptical of the ADX packs at first, but they worked flawlessly for us,” she continued. “I love that the mic connector is recessed. Because of how small and sleek they are, with rounded corners, it makes my life easier with costume and wardrobe, and the actors love them.”

Nick Lidster was similarly appreciative. “With the Axient Digital micro-pack on the lead performers and standard AD1 packs for the rest of the main ensemble, plus eight handhelds, we have 54 simultaneous microphone channels running. It’s been clean as a whistle from the time we pushed up the faders on the first day, so I’ve been very pleased,” he reports.

The new Axient Digital AD610 Access Point was also deployed, enabling the system’s ShowLink remote management system for the ADX1M Micro-Bodypacks. This lets the sound engineer monitor and changes all transmitter functions remotely, in real time. Even better, the system can detect and avoid interference, using ShowLink functionality in conjunction with the AXT600 Spectrum Manager for an extra measure of assurance that the show will go on as planned.

“There are a lot of little touches on the micro-packs that make my job easier,” noted Farina. “I appreciate that the buttons are on the top and bottom and that there is no antenna to hide. And because they are small and thin and curved, they can go almost anywhere. Things like remote control, power lock, and knowing the exact battery life of the rechargeables are all great. Everything has been really reliable.”

For Sound Designer Nick Lidster, Axient Digital proved itself worthy in an extremely challenging application. “Working in association with Shure and OSA International on this particular show has been invaluable,” he continued. “Jesus Christ Superstar requires a rock and roll aesthetic, and we had to bring a lot of technology into a very traditional opera venue to make that happen. With Axient Digital, I feel as though Shure is actually listening to theatre sound designers and turning up with products that are actually intended for our specific needs.”