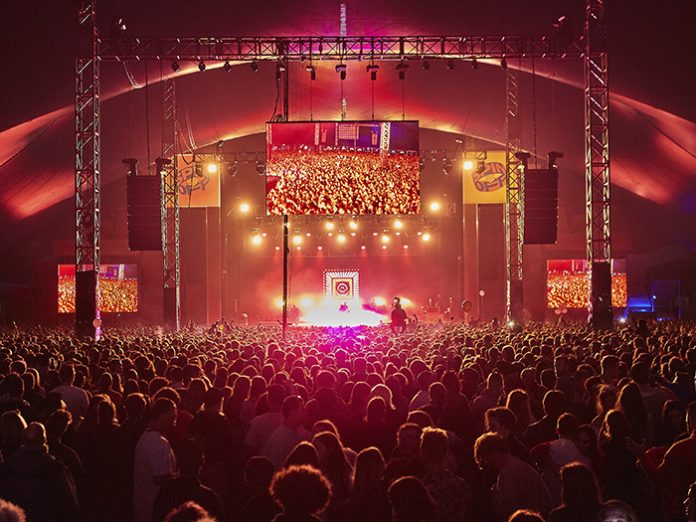 The entire single-stage gig was housed in a gigantic modular tent, 60 metres wide and 100 meters long. Its supporting king poles could hold a massive six tonnes each, which was a good thing, because Spin Off had a huge requirement for LED screens, lighting, and PA, all supplied by Novatech.

The main PA consisted of 16 elements of L-Acoustics K2 line array per side, supported by 32 LAcoustics SB28 subwoofers. Two delay hangs of eight elements of K2 were supported by rigging halfway down the tent, and L-Acoustics’ smaller Kara line source were used as infill and outfill. The audio system was modelled beforehand and checked for even coverage by Novatech using L-AcousticsSoundVision software. L-Acoustics P1 processors, which integrate the new M1 measurement and tuning system, looked after the PA and kept it purring through the show.

Onstage, Novatech deployed L-Acoustics X15 wedges, augmented by d&b audiotechnik M2 wedges for Catfish and The Bottlemen. A full complement of industry-standard in-ear-monitoring systems and wireless mics were on hand to cater to each artists’ preferences.
Novatech provided Avid Profile mixing desks for the house system at both FOH and monitors. Touring consoles that made guest appearances at FOH included a DiGiCo SD7 for Childish Gambino, a Midas Pro 2 for Catfish and The Bottlemen, and a DiGiCo SD10 for Ocean Alley. Monitor-land hosted Ocean Alley’s DiGiCo SD12, Catfish and The Bottlemen’s DiGiCo SD10 and Childish Gambino’s SSL 500. All signal transport was integrated via Optocore.

Lighting control provided for the house was courtesy a grandMA3 and grandMA3 light. Childish Gambino rolled in a grandMA2 and a grandMA2 light. Catfish and The Bottlemen’s LD rocked a ChamSys MQ100, while Ball Park Music’s lighting crew opted for a High-End Systems Hog 4. Art-Net switching was ingeniously handled by a TMB ProPlex GBS network selector, enabling seamless transition from desk to desk, along with redundant fibre connection for peace-of-mind.  The all-important video component saw huge ROE Visual Carbon 5 LED screens built throughout the venue; two IMAG screens left and right of the stage measuring 6 by 3.6m each, a 6 by 3.6m delay screen hung at the FOH ops position, an 8.4 by 4.8m screen hung upstage, and two 5.4 by 3m screens outside the tent. All screens were run via Brompton SX40 LED processors, fed by fibre from Brompton Tessera XD 10G data distribution units.

A Ross Carbonite flyaway kit was brought in for video switching and fed by Novatech’s cameras positioned at FOH ops and on stage. Childish Gambino’s crew utilised Novatech’s video and capture gear and supplemented it with cameras and operators of their own, patching into the system.

“I had a bit of a moment sitting at FOH ops watching the show,” shared Novatech’s Managing Director Leko Novakovic. “I looked up and realised that all of the lighting, all of the audio, and all of the video was owned provided by Novatech. It was a good moment!”