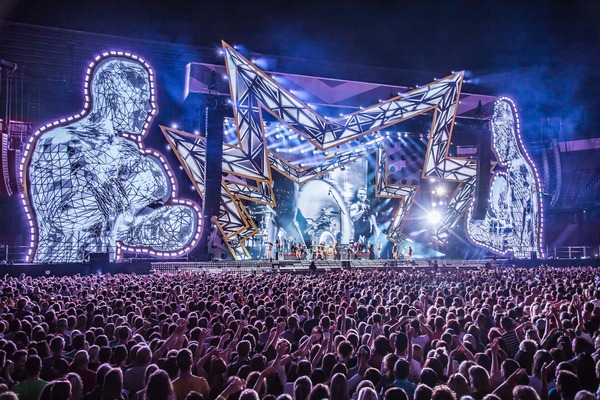 Following the success of his album Heavy Entertainment Show, Robbie Williams set out on tour in June 2017 with the tour’s audio handled by long-term audio supplier Britannia Row Productions (Brit Row), with a combination of L-Acoustics K1 and K2 chosen as the loudspeaker system.

Brit Row has deployed L-Acoustics K1 for William’s over the last 5 years, with each tour. In 2014, they switched to K2 for rear hangs and downfill cabinets, this year they have updated amplification to the latest LA12X amplified controllers.

“Updating to running the whole system on the new LA12X amplifiers is our big step forward this year,” said Brit Row’s Josh Lloyd. “Not only have we seen an improvement in how the system sounds, but the LA12X also provides the incredibly helpful Load Checker feature that measures the attached loudspeakers to help us make sure that everything is working correctly.  We have also been using KS28 subwoofers since the end of Robbie’s promo run in 2016. We are now carrying 42 on this tour and are blown away by how musical they are, as well as how low they go. They have added another dimension to the show.”

The tour’s system was designed during the pre-production phase, with each venue mapped out in L-Acoustics 3D acoustical simulation programme, Soundvision. The team took time to configure the box count and mechanics of the system on a per venue basis before carrying out final gain, delay and EQ adjustments in Soundvision closer to the show date.

“In the UK, we carried a ring delay for the larger stadiums such as Manchester, Dublin and London,” added Lloyd. “This was comprised of up to 12 hangs of K2 flown from the stadium roof to cover the upper levels of the stadium. The variable horizontal coverage of the K2 was invaluable in being able to optimise coverage and keep energy away from unwanted parts of the stadiums.

“In Europe, we carry a smaller compliment of K2 to help with extra delay duties in stadiums there, flying up to four additional hangs to help in the hard to cover areas. We also had shows on various large greenfield sites which allowed us to have up to 6 delay towers to cover the field,” he explained.

Additionally, the low end is augmented by a sub arc of 24 L-Acoustics KS28 under the stage, with 2 end fire arrays on the extreme outside of the stage comprising 9 KS28 per side. Frontfill duties are handled by 4 Kara cabinets on the front edge of the stage with 14 ARCSII on the wings.

“The L-Acoustics system is working perfectly,” concluded Josh. “Simon Hodge, Robbie’s Front of House engineer, is very happy with how it’s performing and we’ve had a lot of compliments on the sound quality.”

The tour concluded in Europe at the beginning of September, with an additional Australasian leg announced for February and March next year.