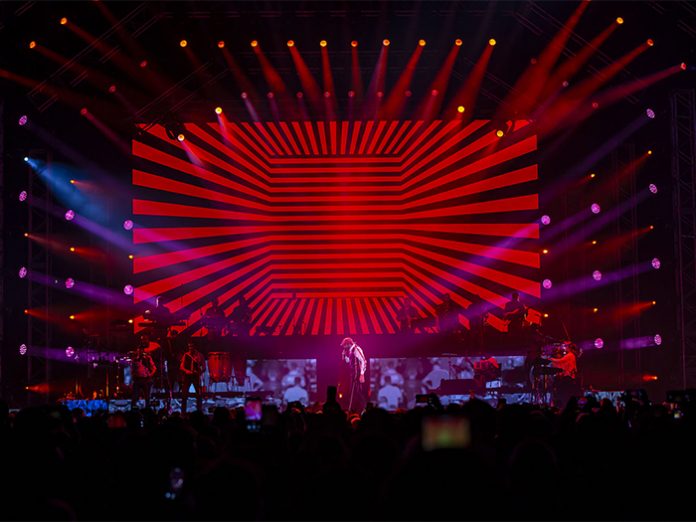 Juan Luis Guerra recently kicked off his 2019 Literal Juan Luis Guerra 4.40 Tour Grandes Éxitos with a complete Robe specification for the lighting rig, which has been designed by Daniel Charif and is being operated and directed on the road by Emmanuel Ferry, who also programmed.

The three-time Grammy and 21-time Latin Grammy award-winning artist, musician, singer, composer and record producer has sold over 70 million records worldwide and is one of the most internationally recognised Dominican artists. His signature merengue / Afro-Latin fusion style has been distinctive, popular and successful, and for this tour he is playing alongside his fantastic and highly acclaimed band, 440, creating a diverse mix of sounds in an entertaining live show.

Bogota’s new Movistar Arena provided the second stop on the tour. The show was completely sold-out and Ferry was delighted because they had nearly their full complement of Robe moving lights supplied by the house technical providers Linea Estrategica, Colombia’s largest rental company.

These are at the hub of the rig, augmented with around 75 other lights including more wash lights, strobes and 2-lite blinders.

The main reason for choosing Robe – apart from the fact that it’s a market-leading brand, popular on the premium Latin circuit, and one of Charif’s favourites – is that the design needed exceptionally bright fixtures to be able to cut through a large expanse of 6mm LED screen.

The screen isn’t just at the back; all the stage risers, set and steps are also fronted with LED, and they also have two side screens.

So, with so many lumens to slice through, the choice was BMFLs, MegaPointes and Spiiders, “all renowned for their brightness.”

The lights in Bogota were rigged across three ‘goalpost’-style trusses onstage and a front ‘advance’ truss. The goalposts created a shrinking perspective look and offered up three sets of trussing side legs, ideal for hanging wash fixtures like the Spiiders in practical cross-lighting positions.

The hard edges of the BMFLs and the MegaPointes cut through the ambience of the LED screen that dominated the upstage area, but, despite its prominence, lighting cues and video content worked harmoniously together, an aspect of the show on which Charif and Ferry worked very hard with video directors Tabare Blanchard and Dennis Lozado.

The show itself is a lively performance and a collage of colour, energy and animation as well as rich and rhythmic sounds that get everyone dancing in the first number.

The lighting looks are straightforward, definite and strong. Juan Luis Guerra’s big all-embracing sound and his charismatic show is so tight musically that he doesn’t need lots of whizz-bang effects to help it along.

Ferry was happy to have Robe on the spec as it’s also his first choice of moving light. He likes the “power, colours and overall performance” and believes the brand has brought “new standards to the market” with its products. He’s been using and specifying these for several years, but especially in the last two years and is impressed with Robe’s progression.

The MegaPointe is currently his favourite Robe product. That’s because of its “huge power and versatility.”

He likes the colours, the smooth mixing, the gobos and prisms plus the fact it’s light and fast. Ferry thinks the BMFLs are “great workhorses” for any medium to large rig, event or venue. Ahead of the Juan Luis Guerra tour, programming was the biggest challenge as the time was short and pressured, but he and Daniel managed to get lots of great-looking looks and transitions into the ChamSys MQ80 console – which he owns.

Ferry is also from the Dominican Republic and enjoys being part of the Juan Luis Guerra team: “They are great people, very down-to-earth! It’s a family atmosphere where everyone is treated well and their contributions to the show are valued,” he explained.

The star gets involved in the production himself, how he and the band look and are presented onstage, so he personally appreciates and understands the crew’s collective efforts to ensure his fans always have an excellent and memorable experience.