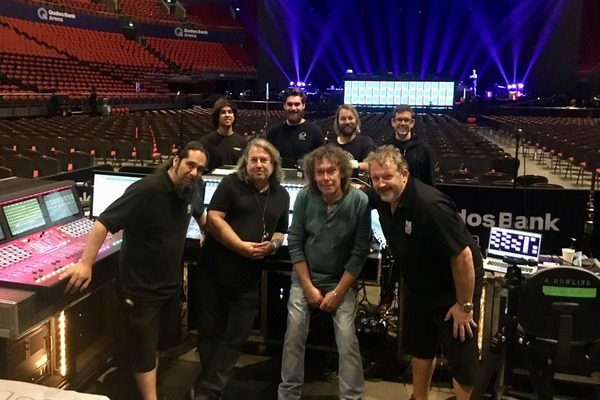 Sir Paul McCartney brought his acclaimed long-running One On One Tour to Australia in December 2017, his first Australian tour since 1993’s The New World Tour, and supported by veteran FOH engineer Paul ‘Pab’ Boothroyd.

“I first started working for him in 1989,” said Pab. “As well as being on stage for 3 hours, he also does a one hour sound check every day. With line checks and system checks as well, I’m probably behind the console twiddling knobs for 5 hours so it’s quite an extensive day technically.”

That FOH console was an Avid Venue S6L, which carries dialed-in snapshots for more than 100 songs. “It’s very powerful and has massive capability,” remarked Pab. “My vocal chain for Paul is fairly straightforward; I’m using a Sonnox Oxford EQ and Avid Pro compressor. For effects there are some general reverbs (short, medium and large), a little bit of delay ADT and that’s it. There’s no playback or inputs from anywhere else, it’s all live.” Smack!, ReVibe II, ReVibe I on drums and Mod Delay III were used sparingly, as the primary plug-ins.

JPJ Audio supplied the crew and gear for the tour including their Clair Brothers’ Cohesion Series for PA. During the Sydney show indoors at Qudos Bank Arena, Pab utilised 16 CO12 L+R, 14 CO12 LL+RR, 12 CO12 LLL+RRR, 6 CP218 Subs flown per side, 3 CP218 Subs per side ground stacked and 12 CO8 for front fill. “It’s absolutely the PA of choice for me,” explained Pab. “I find it very flexible, light, and simple to manage. It delivers great results and is very accurate.”

The stage is fairly loud with only Wixy (musical director/multi-instrumentalist Paul “Wix” Wickens) wearing IEMs. The rest of the band opts for Clair R4 sidefills with ML18 subs and SRM wedges. Monitor Engineer John “Grubby” Callis uses an analog Midas Heritage H3000. “It’s very old-school rock and roll. It’s loud sidefills and wedges up there because he likes to rock out.” Pab continued. “I like Audix on the drums and Shure for the vocals. Paul’s very happy with the SM58A because he’s used to it – there may be a better microphone to suit his vocals these days but he is very used to what he has had for the past 30 years. So, why change? Thanks JPJ for the fun and hard work, greatly appreciated,” he concluded.