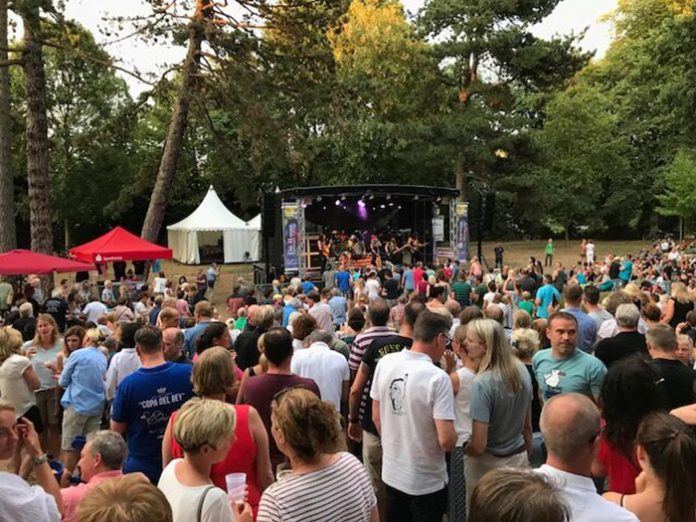 German audio rental specialist It’s A Bird, under the direction of Cornelius ‘Conny’ Vogel, are off to a flying start with their newly-purchased NEXO GEO M10 mid-size line array.

Now entering his 20th year as a NEXO rental user, Conny Vogel added the GEO M10 system to inventory, seeing it as an alternative to the GEO S12 array that he has been using since 2008. “The new M10 weighs half as much as the S12 system, and it has significantly easier rigging,” said Vogel. “We notice a longer throw, especially for vocals, and a significantly better performance in the vocal range.  Because it has a much better rear rejection, there are fewer feedback problems on stage.”

A perfect example of Vogel’s observations was a sell-out concert by the internationally-successful German singer Ute Lemper.  Performing at Raesfeld with the Russian Chamber Philharmonic St Petersburg and a jazz band, Lemper performed to a full house of 1000 people.

It’s A Bird supplied a full complement of NEXO cabinets, with 6 GEO M10 and 2 LS18 subs per side for the main PA, and six cabinets of the smaller GEO M6 line array for side fill.  All stage monitoring was delivered by 10 NEXO PS10-R2 wedges.

“The range of this small system was considerable,” reported Conny Vogel. “The results were uniform, with a very good musical sound image.  Most importantly in the case of Ute Lemper, the vocal clarity was outstanding.”

It’s A Bird provided the same system for a stadium rock cover band, playing in Nienburg to an audience of 800 (nearfield) and 3500 in the wider space.  “Visiting technicians told us they were surprised by the range of such a small system, which could still produce a very musical performance.”

Vogel praises the cost-effectiveness of the GEO M10. “It is a very good passive tuned system, which can adapt to different acoustic conditions, requiring very few filters.  The system behaves very homogeneously, and tuning is really easy.”

For a touring cinema production, showing the movie The Most Beautiful Girl in the World with a live band and vocals, It’s A Bird scaled down the GEO M10 system to just 4 cabinets per side, plus 2 LS 18 subs. For this smaller audience, about 900 in total, the objective was punchy concert sound. “The coverage was uniform, and musical sounding. Compared to the results in fixed cinema locations, we achieved the ‘aha!’ effect from our clients and audiences which was extremely positive.”