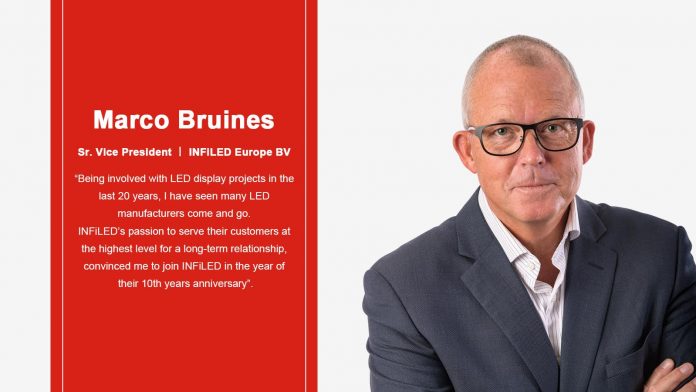 INFiLED has announced that Marco Bruines will join the company as Sr. Vice President of INFiLED Europe.

Bruines has a long experience in the LED display industry starting as President of BarcoLeyard in China, where he also lived for 4 years with his family. He held several executive roles in Europe at Inter Visual Systems, BARCO and at his own company SIGHT, a system integrator in the Benelux focused on broadcast studios, which was acquired by LEYARD.

In the last 2 years, Bruines held the position of CEO in Leyard Europe, where he was responsible for the expansion of the EMEA region, including the acquisition of EYEVIS in Germany in May 2018.

“We are very happy to announce that Marco is joining our company bringing his knowledge and industry experience on LED displays to our European business partners,” said Michael Hao, CEO of INFiLED. “In his new position, Marco will lead the Sales & Marketing in Europe with a focus on the Rental & Staging and fixed installation markets.”

Marco Bruines added, “Being involved with LED display projects in the last 20 years, I have seen many LED manufacturers come and go. INFiLED’s passion to serve their customers at the highest level for a long-term relationship, convinced me to join INFiLED in the year of their 10th years anniversary”.

INFiLED has announced to increase their Sales & Marketing team and activities in Europe, opening a new showroom and extending technical service/warehouse facility later this year.