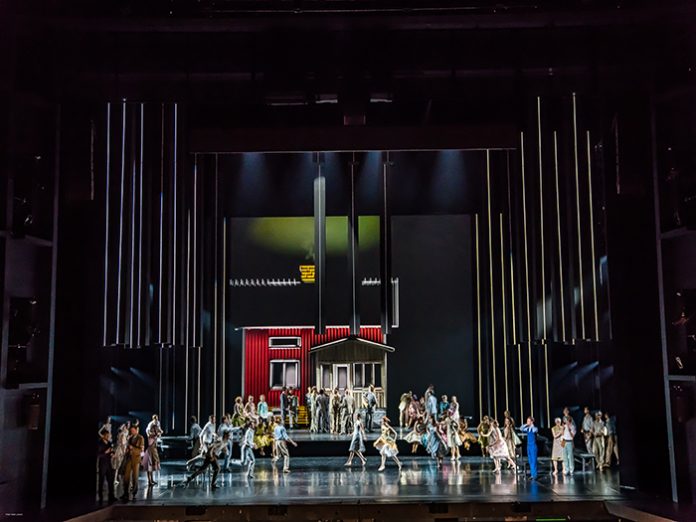 Green Hippo’s Hippotizer is the Media Server of choice for Finnish National Opera and Ballet’s landmark production to mark 100 years of Finland’s independence.

The Finnish National Opera and Ballet (FNOB) marked 100 years of Finnish independence with a number of exclusive events. Its headline event, Land of Kalevala, premiered in November 2017 running for 26 amazing performances until February 2018.

Taking place in the FNOB’s home base, the Opera House in Helsinki, Kenneth Greve’s ballet spectacle explores the very essence of Finland and the Finns through dance. The crack team behind this occasion was very carefully assembled, with Mikki Kunttu taking charge of set, lighting and projection design.

The main concept of the stage design was 38, 12m tall pillars flying through space, creating different three-dimensional scenes and transitions. Kunttu’s wish was to create lighting and projection content to complement the ‘mass’ of the pillars, creating a single, visual entity. One which, in Kunttu’s vision, represents the weight of Finland’s history and subconscious memory, which carries from generation to generation.

Working with Kunttu on show nights were operators Tommi Kiviranta and Heikki Riihijärvi from the Opera House, together with the head of lighting, Tommi Härkönen. Kunttu was already a confirmed fan of Green Hippo’s Hippotizer Media Servers, in particular, its responsiveness in terms of how quickly intuitive changes can be made during stage rehearsals, so it was second nature for him to specify a pair of Green Hippo Hippotizer Boreal Media Servers.

The Green Hippo Hippotizer units – one main and one backup – controlled a brace of Barco HDQ-2K40, one handling front projection on to gauze, the other providing back projection on PVC. Mikki and his team also used Notch, the game-changing real-time visual creation tool that keeps up with your ideas, which seamlessly integrates with Hippotizer Media Servers – as well as Hantmade’s Stage Plugin for Cinema 4D. Additional key gear in his Land of Kalevala inventory included the venue’s MA Lighting grandMA2 console, as well as further lighting gear.

The blockbuster production was a triumph with rave reviews more than justifying the considerable investment made by the FNOB. Kunttu concluded: “Hippotizer is the tool of choice for the Opera House and I love working with it. The system is very responsive in terms of how quickly intuitive changes can be made during stage rehearsals. In a production like Land of Kalevala, time is of the highest value and Hippotizer helped me to use the stage time as effectively as possible.”