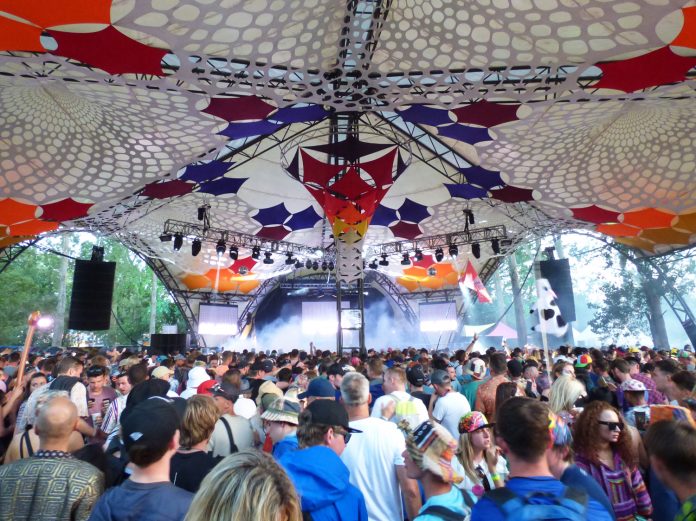 Funktion-One teamed up with long-term partner Audio Plus to give Vero its first Glastonbury outing at The Glade. The stage, which enjoyed a mixed programme of DJ and live performances, received plaudits from artists, festivalgoers and sound engineers, who praised the system’s precise stereo imaging and generous headroom.

Area Coordinator of Avalon, Glade and The Wood, Luke Piper, said: “I was overjoyed with the new system – it surpassed all expectations. We quadrupled the normal capacity of the venue up to 20,000, with people dancing right at the back of the crowd to Carl Cox, Fatboy Slim and Squarepusher. Here it sounded just as good as at the front with a full range, solid, clear and real bottom end, and great mid-range separation. Vero is a very real ‘non-synthetic’ alive sounding system that’s perfect for live and electronic acts alike. It’s the best system I’ve ever worked with.”

The Glade Stage system comprised left and right hangs of seven Vero enclosures per side – three V315s, two V90s and two V60s. These flown arrays were paired with an asymmetric bass setup consisting of a two wide/six high block of F124s stage left and a stack of four F221s stage right. The system was powered by Lab.gruppen PLM20K44 amps.

A fill system was deployed around the video relay screen which serviced the overspill area. It featured Evo 7Ts with Evo 7THs (for enhanced mid/highs) and F221 bass enclosures and could be turned on or off, depending on the size of the crowd.

Funktion-One implemented new crossover filter discoveries made during the development of Vero VX, leading Funktion-One founder Tony Andrews to conclude that Vero at The Glade was: “The best I’ve ever heard it.”

Dub Pistols’ FOH engineer Bill Borez was also pleased with the result: “I used the new Funktion-One Vero on The Glade Stage at Glastonbury festival and was extremely impressed with this system – very clean, very precise with great stereo imaging. Vocals cut through beautifully, and the bass was – for want of a better phrase – absolutely enormous.”

Kuenta’s FOH engineer Jovani Kock enthused: “I had a really wonderful time mixing on Vero – it is everything you want from a PA. As an engineer mixing a band that is low-end heavy, the Vero system exceeded all my expectations by miles. Lots of headroom, without compromising sound quality. I could mix in great detail without having to push the faders too much.”