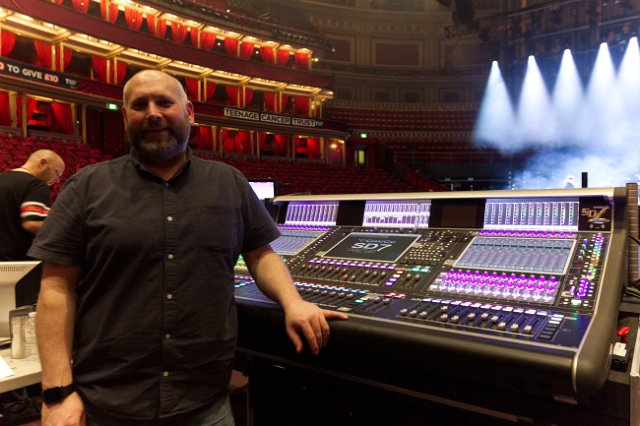 Only a few weeks before the Teenage Cancer Trust (TCT) shows at London’s Royal Albert Hall, Entec Sound and Light took delivery of what is arguably the most powerful mixing console on the market today – DiGiCo’s SD7 Quantum 7 – and became the first UK rental company to deploy this audio powerhouse on a major show. Was it a risky move to take a console the company had not had a chance to fully test onto a high-profile, week-long run of shows it has supported since the turn of the century? Not at all, according to Entec’s head of sound, Jonny Clark.

Entec’s decision to purchase the SD7 Quantum 7 was artist driven. “We’d had a request from a monitor engineer who was running out of input and outputs,” explained Jonny. “We always strive to do our best for our clients and, whilst our reputation has been built on the service we provide, equipment is also important and if something specific is needed, then we will make the investment. DiGiCo is at the top of most people’s console list, so purchasing the SD7 Quantum 7 during our investment cycle made sense.”

As soon as Entec had taken delivery, the new consoles were set up in the warehouse to allow engineers to familiarise themselves with its new features.

“I’d been spreading the word about the Quantum engine,” said Jonny. “There’s been a bit of myth about what it can and can’t do, so I invited engineers to come and have a play.”

This was part of the reason Entec made the decision to use the new console on TCT: to give visiting engineers the chance to experience the new features of the Quantum 7 engine, but with the confidence that the familiarity of the DiGiCo worksurface would allow them to mix their show without any issues.

“And it was great,” said Bertie Hunter, Entec’s FOH tech for TCT. “It was fast and stable with no issues. We had lots of old show files come in that went straight onto the desk without a problem. We ran everything AES and had a number of other desks coming into (that ran into an SD11 which served as a matrix console) and everything was stable. Not only does it sound great, but everyone found it easy to use. We had one engineer that wasn’t used to using an SD7. He spent just four or five minutes on it and was already pretty happy. That’s a testament to how quick DiGiCo consoles are to get around.”

With the SD7 Quantum 7 attracting attention at FOH, Emma Wood looked after an SD10 at the monitor position, helping visiting engineers when required and mixing for those artists that had not brought their own engineer with them.

“The SD10 is perfect for the monitor position,” she says. “It’s really flexible, which is a big advantage when you’re not quite sure what you’re going to need to do and need to be ready for anything.”

With a console inventory that includes S21, SD11, SD10, SD12, SD7 and now a pair of SD7 Quantum 7s, Entec is certainly set for the future and both Jonny and Bertie are excited about utilising the full potential of their new console.

“The sheer processing power and the dual engines are a big draw for the SD7 Quantum 7,” said Jonny. “And the nodal feature, which allows you to tailor things exactly to your own requirements, will be a big help and something that I know both artists and engineers will like.

“Our console combination gives us an incredible amount of flexibility as a rental company, and the addition of the SD7 Quantum 7 means we can handle absolutely any size of the show. We’ve already got enquiries for it during the summer and we’re looking forward to really putting it through its paces.”