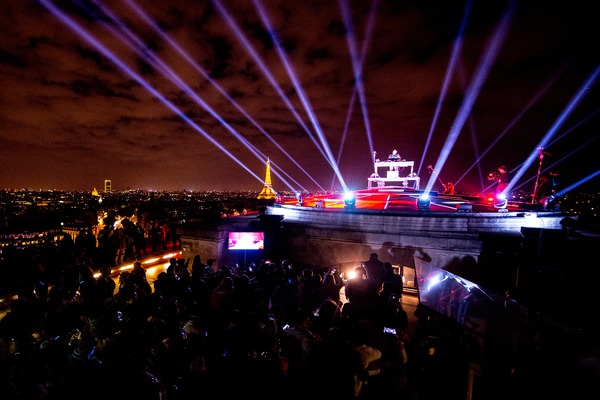 LIT Productions pulled off a world first in September 2017 when they designed and produced a top secret DJ Snake show on the top of the Arc de Triomphe.

Boss Rob Lister, 30, described the show, a launch of Snake’s latest single A Different Way, as a “logistical nightmare, but among the most rewarding shows” of his career.

Getting LED floor screen measuring 14 metres by 4 metres, 40 lighting fixtures, a PA system and a riser package in a 2 metres by 1 metre lift and up 2 sets of 40 wide stairs proved a challenge for even the most competent crew.

From the front, the audience benefited from a Batman-style light show as ClayPaky Mythos shot beams into the sky, and GLP’s new JDC-1 strobe as architectural and effect lighting.

The front of the monument was illuminated with the colours of the Paris flag, from the Champs Elysées using City Colours and Martin by Harman Viper Performance.

Lister, of LIT Productions, said: “This was a big one, there was no room for error and we had to get it right first time. The monument was open to the public the whole time that we loaded in, so all the equipment had to be on the top of the Arc in between opening hours and without tipping anyone off we were going to do this super secret show.

“From our point of view, to see our design executed properly and to see an artist we respect doing his thing, on one of the most iconic buildings in the world, in his hometown – was such a privilege and a great moment for everyone involved. The crew we had were incredible so although it was a logistical nightmare it definitely became one of the most rewarding shows of my career. Everyone really enjoyed being part of something so epic,” Lister concluded.