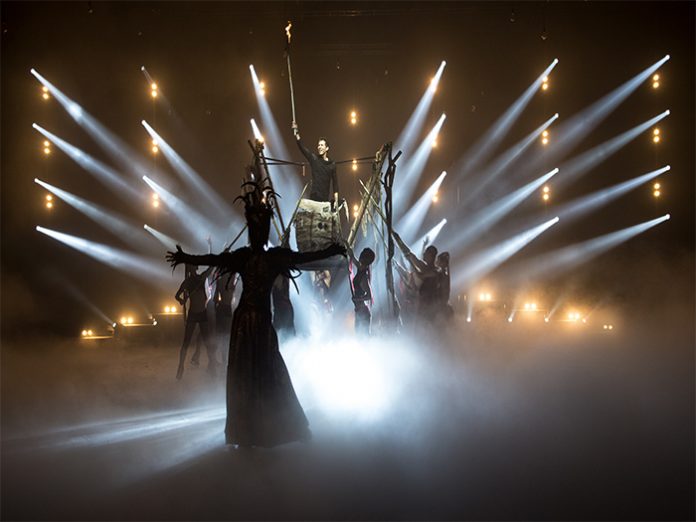 Ilusio, Magic on Ice, created by and starring Steve Wheeler, has played to millions of people in more than 4,000 performances across the US, Europe, the Middle East and Asia.

To help light the show when it appeared last fall at The Berglund Center in Roanoke, Virginia, Lighting Designer Emiliano Morgia chose Claypaky Sharpys and Sharpy Washes, supplied by Lee Hartman & Sons in Roanoke. ACT Lighting is the exclusive distributor of Claypaky lighting in North America.

There were 24 Claypaky Sharpys mounted on 4 custom trusses built by Wheeler Productions over the show’s ice rink and 10 Claypaky Sharpy Washes were placed on the floor as back lights. “Sharpys are unique beams lights. There is nothing in the market that can compete with them – my choice was obvious,” said Morgia. “Claypaky is without doubt my favorite brand in the industry, not only for the high quality of the hardware and the quality of the light beams. Claypaky also offers incredible support worldwide for both technical and sales.”

Morgia recalled being just 9 years old the first time he met Claypaky’s Pio Nahum. “When I finally decided to start working in the industry I took Claypaky as my reference and have never had any sort of problem with any of their products,” he said. “I started back in 1990 with Superscans, and I find it remarkable how the company has evolved. Every time I start a new show I think of [Claypaky founder] Pasquale Quadri, who is always present in my heart, since he was a real pioneer in the industry.”

Morgia’s biggest challenge during the show’s design process was to consider the huge white surface of the ice rink. He commented: “That isn’t easy since the ice reflects any light pointing at it; that’s why we decided to use the overhead lights and mainly focus them straight down. I had huge help from the unique characteristics of the Sharpys. Their beams allowed us to create a unique ‘cage’ of light and to light up only the areas that we wanted to.”

The show was pre-programmed using Wysiwyg previs software 3 months before the first performance. The previs studio was in Italy where the lighting design team used realtime screen sharing to connect with the creative team in Las Vegas. “We worked hard for 90 days to sync each cue with timecode and the choreography,” Morgia concluded. “Lighting 20 people skating backwards and forward on such a big area isn’t easy. I’ve seen other ice shows where my colleagues tend to wash up the whole ice rink. The challenge for me was to program each step of the choreography and make sure not to blast the ‘stage.’ To achieve this we ended up programming over 700 lighting cues for 120 minutes of show – an average of one cue every 6 seconds.”