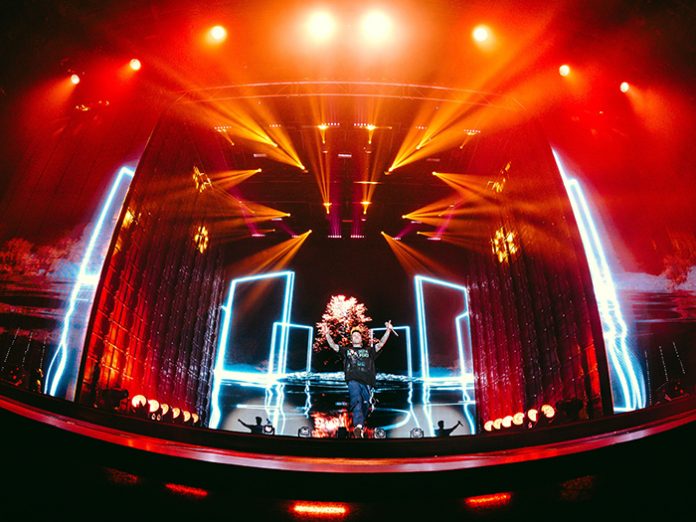 Ricci said: “I chose Mythos 2 units for the great versatility they allowed me. With these units, I could go from beam light to spotlight depending on the needs during the individual parts of the show, and I could program the fixtures differently during the show while exploiting the same installation points. I don’t normally use beam lights very much, but in this case, the ability to switch to beam mode was really important. I can safely say that I made the most of the hybrid features of these units.”

The three front and two side trusses were all fitted with Mythos units, which Jacopo said he “used 90% as pure effects,” including to drill through the semi-transparent cube of LED walls which opened up for the purpose. “I normally use a lot of gobo and animation wheel effects. I also used CMY variations and colour changes a lot. There are quick changes during each song, which I used as true effects. The Mythos units, however, also performed excellently as spotlights during the more theatrical and less complex moments of the show.”

The lighting designer also stressed the high reliability of the Mythos 2 units: “I didn’t have to change a single fixture after eight days of 24 hour programming or at any time throughout the whole tour, and they all worked very smoothly, including as far as their colour rendering was concerned. I was extremely satisfied.”

Jacopo Ricci is a young lighting designer, but he already knows his stuff. He left electrical engineering to pursue his dream. He cut his teeth as a lighting operator by touring with important artists all around the world. He has recently started out as a lighting designer, showing off his modern, dynamic approach, which is perfectly in line with the rest of the team: “My colleague Lorenzo and I have set up a WhatsApp group with the artist, so we have a constant direct line. Interactivity is increasingly pervasive in our daily lives, and it can really help us in our work too.”

The other creative member of the team is Lorenzo De Pascalis, Video Creative Director. He is another up-and-coming talented young man, who took care of putting together and programming the video clips. “Together we presented the production team with a show flow of over 60 pages, in which we specified everything in detail: not only the lighting, video and laser systems, but also the positioning of the cameras, automations, special effects, and the use of costumes and colours. Once they approved this document, Fedez and the production team handed complete control of the show over to us.”

The Claypaky B-EYE K20s were mainly used for visual effects on the front truss: “Neither Lorenzo nor I like to use classic wash light effects too much. When we can, we only use colour on some portions of the lens and not on its entire surface. It was particular easy to do this with the Claypaky B-EYEs, thanks to their excellent electronics that makes programming simple. We also used the B-EYEs in pixel mapping mode, so that their colours were in keeping with the videos.”