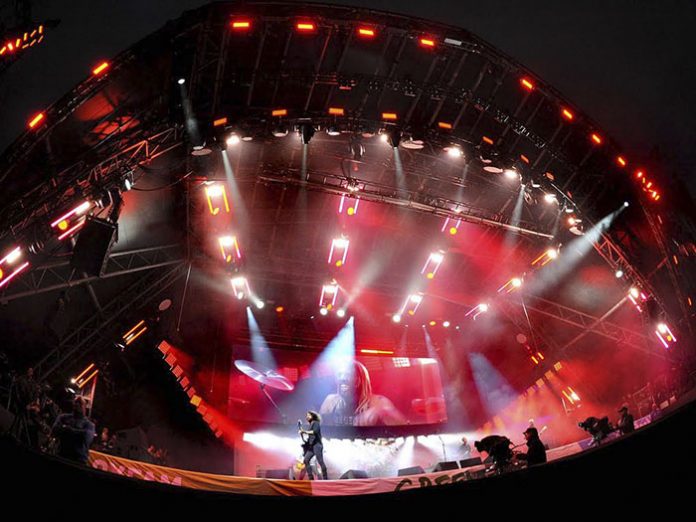 Mark Cunniffe, LD for Sunday night headliner, Ed Sheeran was impressed by the output of the fixture, commenting: “I loved the Color Force IIs. They worked really well in a daylight application.”

Kirk J Miller, lighting director for Katy Perry’s early evening, full daylight performance commented: “I’ve used the Chroma-Q Color Force IIs on a number of TV productions and I absolutely love them. They’re bright, well lensed, and put out some great colour. Here, even in full daylight, they make a huge dent, glad to see them in the rig.”

With so much expectation, only the highest production values will do on the Pyramid Stage. Andy “Fraggle” Porter, the stage’s Head of Lighting, and the festival’s premier rental supplier, Neg Earth Lights, felt Chroma-Q fixtures would be ideal and flew the Color Force II 48 1.2m RGBA colour-changing LED battens above artists on the stage.

From as early on as during Friday afternoon’s performances, the powerful Color Force II battens were providing the colour needed to lift great daytime shows by artists such as First Aid Kit. The band’s LD, Timo Kauristo, said: “Of course normally they would be used as cyc lighting, but they make great eye candy when seen by the audience.”

Michael Brown, LD for The National added the Color Force II fixtures to his show just before the performance, but then used them for much of the high energy set in a wide variety of strong primary as well as pastel colours. Commenting after the show, Brown said: “I have used the original Color Force fixtures, but this is the first time I have used the Color Force IIs. I have to say they were much brighter than I thought they would be.”

Six Chroma-Q Space Force soft lights also formed an essential part of the rig, providing TV key lighting during the performances so cameramen could get the shots they needed for performances, many of which were available to stream live online and recorded for TV broadcast live or later on.