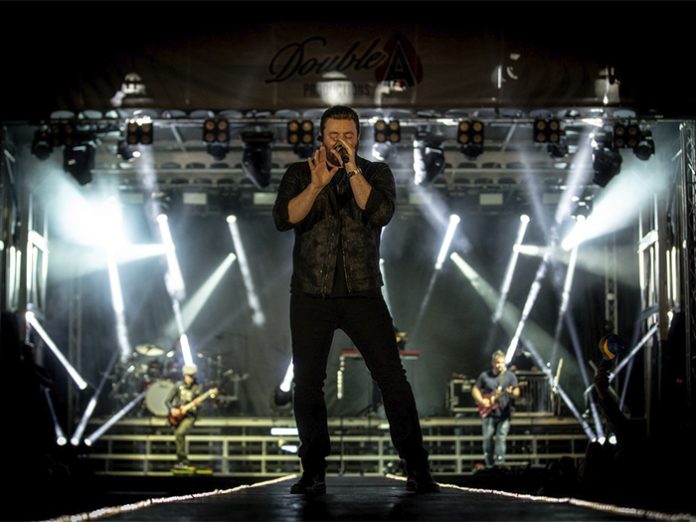 Multi-platinum RCA Records Nashville entertainer Chris Young headlined the first-ever socially distanced concert at Coolray Field on November 14 2020 with a lighting package provided by long-time vendor, Bandit Lites. Young, whose new single Famous Friends with Kane Brown released last month, was joined by special guests Cassadee Pope, Kameron Marlowe, and Payton Smith for the live show. The stadium setting allowed concert goers to have 6’ spaced, pod style seating on the field, in suites and in the stands with face coverings required at all times when guests were not in their designated seats.

“With a limited number of shows for the year you don’t want to hold anything back,” said Young’s lighting director and production manager Mike Stanley. “The challenge was bringing as much of our aesthetic show to the table as possible on a 32’ deck. Although the Gallagher set is incredibly configurable, it is the tightest space to date that it was used and took some pre-planning to make it work.”

“Being a large show in a smaller package for this event, the E-Pix Bars that are built into the set really make a huge impact adding depth to the rig,” said Stanley.

In an industry that was one of the first to halt in March and will be one of the last to resume business as usual, a safe concert was a welcome ray of light. Bandit is exceedingly grateful to have the opportunity to join Chris Young in helping to bring joy to those seeking to enjoy a live concert once again.

“Chris Young doing a live socially distanced event is a great shot in the arm for our industry,” said Bandit Lites Business Development Officer, Brent Barrett. “Getting to work again with Mike Stanley, Bill Cracknell and the entire Chris Young team is an encouraging pleasure! There was no doubt that whatever the current, necessary limitations that this would be a stellar concert with a top-tier production!”

“Honestly it felt like a normal Saturday in a year that has felt anything but normal,” finished Stanley.