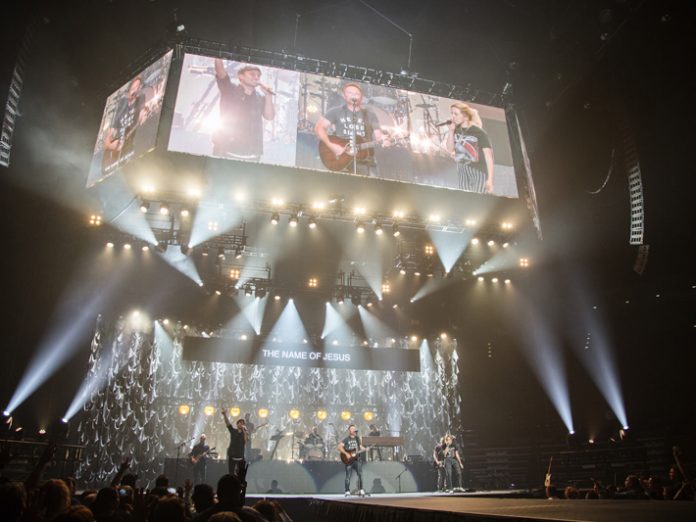 Building off the design of a five city tour from the summer of 2016, LD Christian Hahn had the opportunity to add elements he felt were missing, and by merging together Tomlin’s production design requests and the overall look and feel of the tour, Hahn created a dynamic design that featured big looks, clean lines, smooth transitions and saturated colours.

Hahn summed up the overall design and equipment needs for Worship Night in America to four specific categories: wash fixtures to cover the stage, spot fixtures to hold their own for gobos and beams, a hybrid for additional horsepower and an audience wash.

“We needed a solid wash fixture to cover the 60’ x 46’ stage,” said Hahn. “This also needed to be paired with a static fixture to help colour the 70’ x 30’ tall upstage curtain. (Bandit Vice President) Mike Golden and I talked about different LED fixtures that could do the job and really the choice came down to the fixtures having both a discreet white LED as well as a versatile zoom. For the overall moving light wash fixture, I landed on the Martin MAC Aura, and to colour the upstage curtain as well as up light the band, I chose the GLP Impression X4S.”

While acknowledging the need for a wash look for the front view, Hahn pre-emptively considered the need for a second element to add another layer in order to avoid stagnant looks. After considering the linear truss design, he turned his attention to a linear fixture, the Elation ACL 360 bar, giving him the both the additional layer but also the ‘something special’ a conventional moving light was unable to provide.

“A blinder of some sort was needed, and Chris Tomlin and the band like the warm tungsten look and really like the linear look of the 2-lites,” said Hahn. “In addition to the 2-lites, we added some 4-lites to help give some additional horsepower. I chose the Robe PATT 2013 to add a more unique look to the rig that would create less of a festival look. For strobes, the Phillips SL Nitro 510c came into play nicely and added bright hits to help enhance moments throughout the night.”

Hahn shared Bandit’s Vice President Mike Golden was extremely helpful in offering solutions, paying special attention to balancing budget concerns and changes without ever compromising the integrity of the vision.

“As a designer, I cannot be more thankful as he is not only looking out for himself, but the designer and artist never feel like we are getting B-rig,” he said. “This is only possible due to the fact that Bandit owns an enormous amount of gear and has a variety of levels based on the need/design.”

“Chris Tomlin is an incredible artist and he has surrounded himself with the highest calibre of staff,” added Mike Golden. “I first started working with them last fall and immediately became a fan of the entire production team. Christian Hahn is amazing and a genuine pleasure to work with. As with every tour, there are challenges to overcome but Christian looked at every challenge as an opportunity to explore options both inside and outside the box. The production team of Steven Samuels and Andy McDaniel are a perfect complement to the organization and the touring lighting director (Sam Weiner) produced a truly beautiful show. I would urge anyone to see Chris Tomlin and I applaud the entire staff for the work they are doing.”

Additional support came from Bandit’s Project Manager Matt King, who used a PDF packet of Hahn’s rig and equipment list to anticipate his needs and oversee a good portion of the prep before the tour’s team was even on-site.

“All in all, the pre-production, prep and road experience were great,” finished Hahn on his experience with Bandit. “It is always fun to work with people that care about making things right and don’t mind putting the extra hours in when needed.