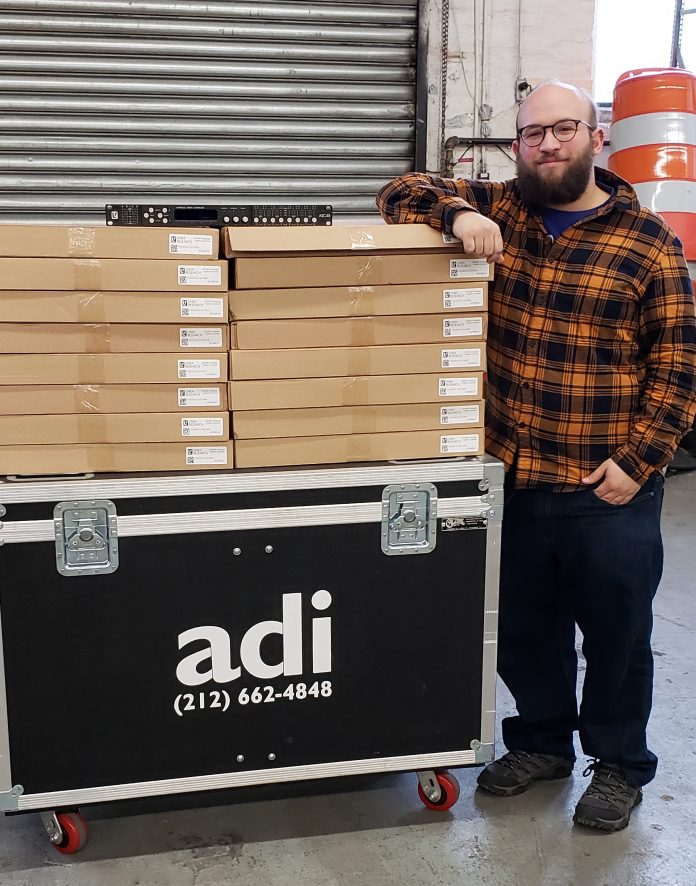 Since opening its doors in 1987, Audible Difference, Inc., has provided premium sound reinforcement services for high-profile fashion and luxury brand events, theatrical productions ranging from Broadway to regional companies, and concerts and tours. ADI also installs sound systems in residences and commercial venues and in recent years has expanded its operations to Los Angeles and Miami.

Always on the lookout for new equipment that outperforms established workhorses, ADI Director of Technical Services Ian Ruben-Schnirman discovered Linea Research amplifiers at the InfoComm trade show. “One of the people at [manufacturers rep firm] Cardone, Solomon & Associates told us about these great new amps and processor products,” Ruben-Schnirman recounted. “We saw the Linea products on the show floor, decided we had to get some, and placed an order right there for two 48M10 amplifiers and two ASC48 processors.”

With eight channels of Class D amplification in a mere 2U of rack space, Linea Research’s 48M10 made an immediate impression on Ruben-Schnirman. When he learned that each channel pumped 1,250 watts RMS into a 2, 4, or 8-ohm load and could drive that same power into a 70 or 100-volt system, he knew ADI had to take the leap and try them. “It has been a big thing for us that the amp sounds so excellent,” he stated. “When we first got them, I did a test between the 48M10 and every other amplifier we owned that didn’t have built-in processing. There was only one other amp I thought sounded as good, and it was an old, 2-channel amp that weighed 60 pounds. The 48M10 is an eight-channel amp that weighs half that, yet still draws the same amount of power.”

ADI has gone on to acquire a total of six of 48M10 amplifiers and no less than 22 Linea Research ASC48 Advanced System Controllers. With 4 inputs, 8 outputs, and the latest in A/D conversion and 96 kHz DSP, the ASC48 is an outstanding partner for Linea’s amps but also mates excellently with almost any combination of amplifiers and speakers. Multiple I/O choices; low-latency, linear-phase crossover filters; multiband limiting; and the powerful VX Limiter suite allow flexible control for tightly managed system performance.

While ADI is not yet stretching the capabilities of the ASC48, its ease of use has been a huge boon to them. “We tend to use the processors as speaker crossovers more than anything else,” explained Ruben-Schnirman. “We have all of our presets built into them, so we don’t have to load different presets for each show at the shop anymore. What’s fantastic is that you can load 50 presets in an ASC48 and then access them from the front panel. If we have an issue, we can go in using the front panel and change settings without a computer. That’s a big plus for us because we don’t know how much time someone will have on a job site, and if something needs to change, the system engineer can adjust it from the front panel. It’s a lot easier and more intuitive than older processors and some of the other products we’ve looked at.”

To accommodate ADI’s increasing use of Dante networking, all of their ASC48 processors have been fitted with optional Dante cards. As very early ASC48 adopters, ADI had to send back their oldest units (the first two to roll off the factory line) to have them retrofitted with Dante cards. Linea turned them around quickly, adding all the electronics updates since the product’s release, in addition to installing the Dante cards. “They take amazing care of us,” Ruben-Schnirman marvelled. “We had an amplifier that was on a show, and the power supply got torched because somebody sent 277 volts into it while it was turned on. These amps will take a lot of abuse but that was a bit too much. We sent it back, and the repair was entirely covered under the warranty with no issues, and quite quickly.”

Between performance, packaging, and support, Ruben-Schnirman is now a firm believer in Linea products. “We’ve had tons of success with them,” he confirmed, “as much or more than with any new product we’ve ever bought.”