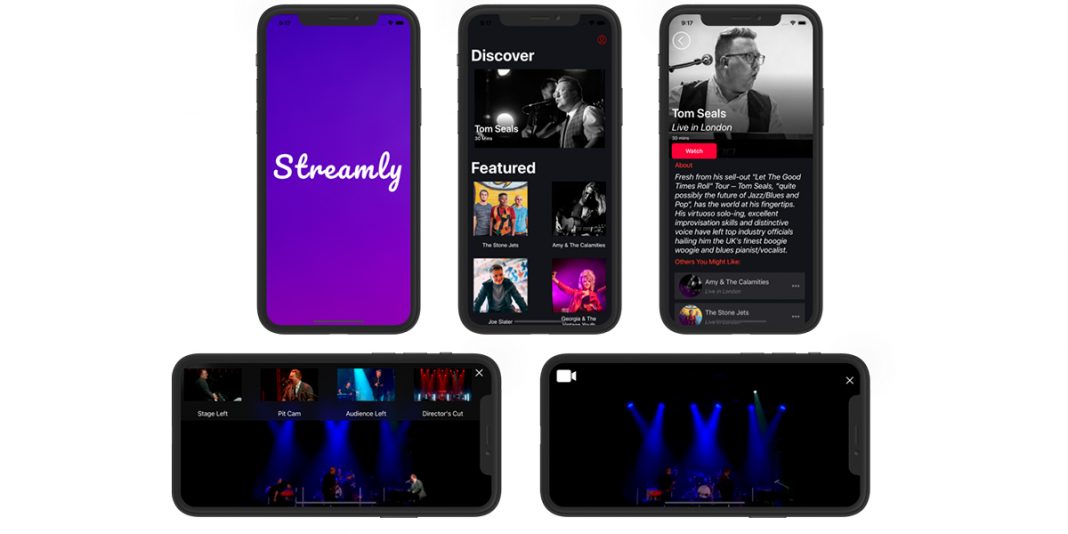 The idea of Streamly is simple; a platform for live events, which allows fans to choose which camera they view in real time without any interruption of the audio feed, providing users a unique live experience. The brainchild of 12 South Creative’s Rich Allen, the app – which dates back pre-COVID-19 – has now taken on a new dimension following the growing demand for interactive, live music experiences in lockdown.

“I’d had the idea for some time,” reflected Allen, who explained that the goal of Streamly was orginally targeted at performing artists as an extension of their touring campaign. “We were not trying to take away from the live experience but add to it.”

Allen, who currently works in the film and broadcasting sector, has a vested interest in the touring industry, having worked in lighting for a number of touring acts over the years. With this knowledge – not to mention the backing and support of major industry names such as U2 Lighting Director, Alex Murphy – Streamly has been created to be the ultimate streaming companion to the touring setup.

“One push back we had initially while pitching the app was the chance of Streamly potently cannibalising live ticket sales,” stated Allen. “However, we have considered this, and we have the capability to geo-lock the platform down to 10m of any area. Hypothetically, if a band was touring around the UK, we can make it so each region can’t access the show until the band has completed those dates.”

Allen explained that the app had the potential to give management and promoters useful data such as hotspots around the globe where the music was streaming, which could mean that touring schedules could be planned to reach audiences performing artists were unaware they had. For each show, a number of cameras are set out in the performance space, which are then streamed simultaneously to the app.

“We also take a separate broadcast mix,” said Allen. “All the feeds are synced via timecode. This is a necessity in the development of the app to provide a seamless experience with continuously synced audio as the viewers can flick from one camera to another.”

The app is currently available on the App Store and it will soon be available for Android. “The next stage is then to ensure the platform is also on Apple TV and Amazon TV,” Allen continued. “It’s one thing to watch this type of performance on a phone or a tablet but watching it on a big screen in HD with high-quality audio is something else entirely and something we want to ensure Streamly can offer.”

During the lockdown of live events, Streamly’s service has naturally sparked the interest of those looking to stream a show behind closed doors. “The gigs we have been doing during lockdown have been very different,” he explained. “In many ways it’s a different chain, with artists and managers coming straight to us rather than through a promoter. With this style of show, I often find we become a tech provider rather than utilising our platform. Although this was not our intent, it has meant more people are interested in our service than before.”

In a bid to promote the capability of the platform, Streamly organised a behind-closed-doors show with a roster of eight artists on the bill. Alex Murphy was brought on to handle the lighting for the show and discussed his experience on the event. “I’ve been really impressed with what I’ve seen of the app so far,” began Murphy. “I’ve known Rich for a while. I think he called me as he knew I could handle doing lighting for this many bands in
a single day.”

As well as working on the road with the likes of U2, Murphy also has a great deal of expertise in the broadcast world. But, as he expressed, this type of show was somewhat of an amalgamation of both worlds. “Over the years, I have done some shows where we have streamed performances where I’ve been handling key light for both the live audience and the people watching the stream. However, for this show, I ignored the live gig and focused on the monitors and all six of the camera feeds,” he expressed.

To light the show, the LD made use of what he dubbed “the lighting package of lockdown” – namely, Astera Titan Tubes. “They are bright enough to be used as key light and, between performances, we were able to quickly move them into different configurations to give the set a different look.”

To close, Murphy gave his thoughts on the exponential increase in streamed events: “There is no doubt that we are going to see more of this type of show in the coming months and I think a lot of LDs are going to have to embrace this style of show very quickly.”