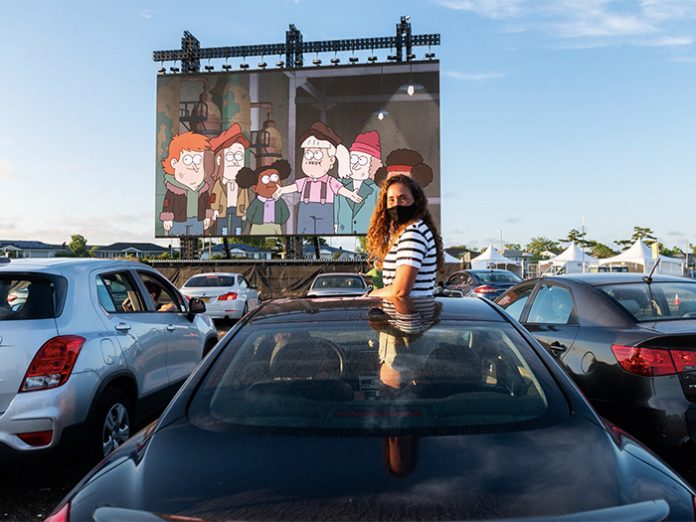 Although the Tribeca Drive-In has been a signature feature of the famed Tribeca Film Festival for 20 years, the annual event takes on special relevance in this summer of COVID-19. WorldStage provided AV support to producer Overland Entertainment to ensure that audiences at the Tribeca Drive-In venue at Nickerson Beach, Long Island enjoy a premium experience.

The Nickerson Beach Drive-In is open from July 2 to August 2, Thursday through Sunday. It premiered with the Hulu Original Film and breakout hit, Palm Springs, and offers an eclectic line up of audience favourites from music-themed features (Selena, The Bodyguard) and sports films (Creed, Jerry Maguire) to time-travel comedies (Back to the Future), high school comedies, road flicks, kids’ picks, a James Bond double feature and special 45th and 25th anniversary screenings of Jaws and Apollo 13, respectively. The Tribeca Drive-In has additional venues at Orchard Beach in the Bronx, the AT&T Stadium in Arlington, Texas and the Rose Bowl Stadium in Pasadena, California.

WorldStage built a 61 by 35ft ROE Visual CB5 LED wall to showcase the films at Nickerson Beach. Overland provided the Clipster system to play back content via DCP technology; WorldStage also plays back content via BluRay, when required, and switches the pre-show and films through a Barco Folsom S3.

“WorldStage is known for its expertise in LED display technology and has done a number of film screenings and previews for HBO so that’s made us very proficient in this arena,” noted WorldStage Account Executive, Andy Muller.

“The CB5’s large-format tiles have a 5.7mm pixel pitch so they are relatively high resolution for an outdoor LED wall,” he said. “Using an LED wall instead of a projection screen allows cars to park closer and still see a high-quality image. It also gives Nickerson Beach a chance to run two shows a day since the LED wall permits films to start at 4.30 pm – they don’t have to wait for it to get dark first. That means Nickerson Beach has twice the capacity of a typical drive-in, delivers twice as much entertainment to audiences and gives the sponsors more bang for their buck.”

BNW Rigging, under Tony Bonilla, built the robust superstructure for the wall, which can withstand winds up to 40 mph and sustain a four-week run exposed to beach weather.

Tommy Boyd was the WorldStage Project Manager for the Nickerson Beach Drive-In.