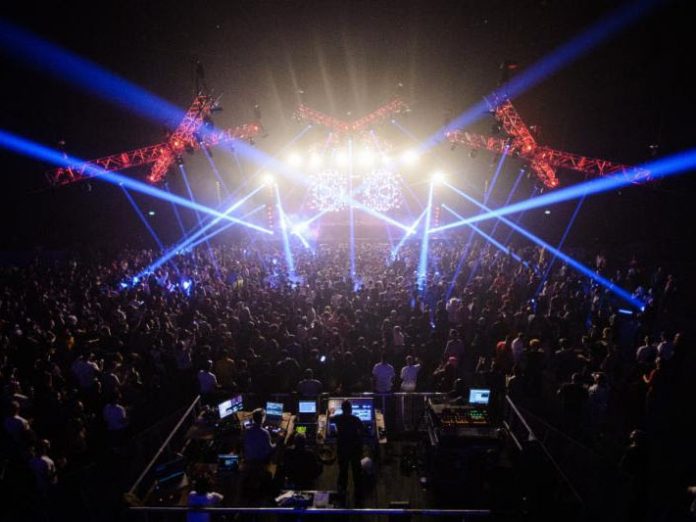 Electronic dance music Lighting Designer Conor Biddle specified an Avolites Sapphire Touch console to power his immersive design for Winterparty ’16, which returned to Ireland’s 3Arena in October after a 12-year hiatus.
Inspired by the lighting at Las Vegas super-clubs, Biddle designed an intense, high-production show to celebrate the mammoth dance event’s welcome return, which saw an epic line-up including Skream, Matador and Sven Vath.
“I specified the Avolites Sapphire Touch running the latest Titan version 10 because a dance event like this requires plenty of live busking,” says Biddle. “The Sapphire Touch’s dual screen and abundance of faders and features allowed me to create my ideal layout through using playbacks and macros. This ability is invaluable when putting together fast-paced designs that have to be adaptable.”
Perfect for both timecoded shows and those on the fly, the Sapphire Touch is a high performance console. The desk’s extensive submasters, flash and executor buttons as well as its extended control surface provides designers such as Biddle with the power to stay in charge of such ambitious lighting displays.
Biddle worked alongside video artist Kev Freeney on Winterparty, whose myriad of visuals were displayed on the large LED screen at the centre of the event’s stage. Biddle extended the reach of the graphics by designing three 10m wide x-shaped trusses at a low trim over the crowd. These trusses created a close atmosphere with the intention of focusing and harnessing the attention of the thousands of attendees who partied until the early hours of the morning.
Adding to the intensity of the structural design was Biddle’s non-stop light show performed by an array of intelligent fixtures including Claypaky Sharpys, Mythos and A.leda B-EYE K10 and K20’s, alongside GLP X4’s and Martin Atomic strobes. The Sapphire Touch handled the demanding networking of such fixtures with ease due to its 8 physical DMX outputs, up to 16 over ArtNet or sACN universes.
To get the best out of his design, Biddle made use of the updated Key Frame Shapes feature of Titan V10. “With Key Frame Shapes, I was able to create colour, dimmer and position effects on different faders and playbacks,” said Biddle. “They were all tied to rate masters as well to adjust live to what the DJ was playing. I love how visual the interface is, making creating effects fast and precise.”
Key Frame Shapes allows users to create custom effects for each channel in seconds. Using pallets or the programmer to define the frames, there are tools such as transition curves, phase and spatial direction to create remarkable effects from scratch.
“Avolites was my first choice for the Winterparty and has been my desk of choice for most of my career,” said Biddle. “The products are great, as is the reliability and support available from the Avolites team.”
www.avolites.com