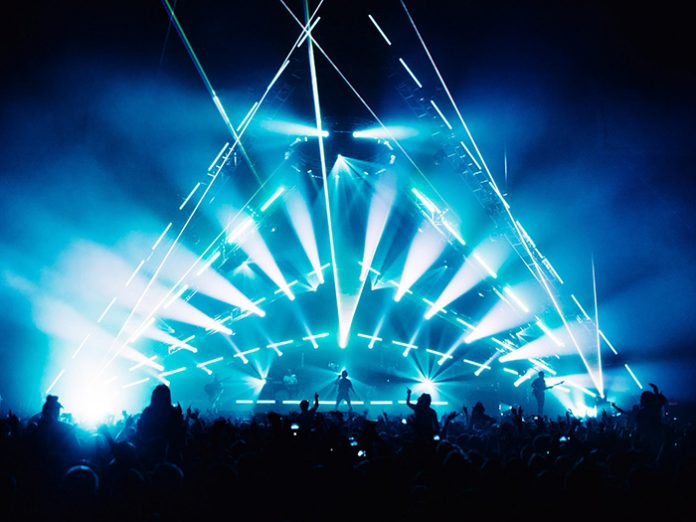 After exploding internationally with the release of latest album, Technology, the group has been touring prolifically for the past year. This has included a sold-out date at London’s Alexandra Palace and other headline shows across Europe; festival gigs at Reading & Leeds and the Vans Warped Tour; and high-profile support slots on massive arena shows in Europe and the US for Thirty Seconds to Mars and Mike Shinoda of Linkin Park.

A Vista user for the past six or so years, Ben has been impressed by the platform’s simple approach to lighting control whilst still enabling programming of complex shows.

As well as upgrading his Don Broco core lighting design of really bright and volumetric triangles, Ben has used Vista 3 to adapt his show around the incredibly varied venues and lighting rigs. The tour dates have alternated between doing a festival with full production, to a small club show with a few PARs, to supporting on an arena stage with a much bigger rig.

Ben commented: “One of my favourite things about Vista is how easy it is to move between such different environments and still retain a huge amount of programming. Vista’s generic fixture model easily handles large amounts of fixture swapping into my design, without the need for any further time-consuming alterations from myself.”

Ben’s design features a lot of complex timecoded cuelists programmed to match the fast-paced, energetic tempo of the songs, which mix up rock, pop and hardcore musical styles.

His portable Vista setup consists of a Vista S1 connected to a high-performance PC laptop running the Vista 3 software, with a Vista M1 serving as an extra wing and a Mac laptop as a backup. The full production rig includes triangles of LED battens, moving lights and strobes. Everything is controlled by Vista, including pixel mapping and media content playback.

Ben commented: “I chose not to use separate media servers for this design as I could achieve all the looks I wanted in Vista 3. I had a lot of fun programming the LED triangles. Vista’s Effects and Matrixes gave me a huge amount of options and effects to try out, and I could manipulate them very quickly.”

Ben is looking forward to using Vista 3 again for Don Broco’s first arena tour of the UK in February, including the biggest headline show of their career at Wembley Arena.

Summarising his Vista 3 experience, he commented: “Vista is getting better and better. Although I’ve always loved how graphical it is, using Vista 3’s new command line feature for certain tasks has made my programming even quicker, so now you really have the best of both worlds at your fingertips.”

Visit www.vistabychromaq.com to download your free demo version of the Vista 3 official software release and find your nearest dealer.