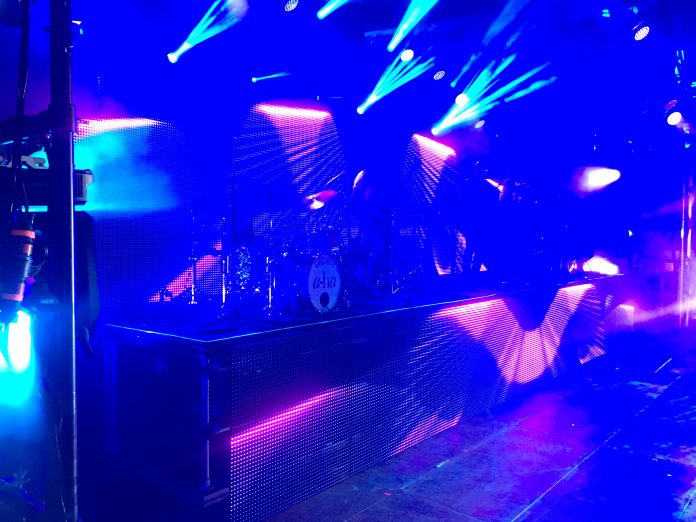 “The visual concept is intended to make the audience think about what they are seeing,” Hogg began. “Stu’s design sees 3 long strips of LED on the front of double-wide risers approximately three-foot tall, one for each band member.

The Vanish25 panels we have from Video Design are chosen to allow the lighting behind to shine through, and for the LED to be part of the effect. We also have an 8-foot tall screen of V25 across the back of the stage. The Vanish panels as the name suggests, are all see-through; we have what we call Sabbath Pods, square frames of lighting that are set behind the LED.

With fewer pixels in a shine through the panel (25mm pixel pitch) you have to be careful about what you put through the LED. The panels have 50% transparency and were chosen deliberately to achieve the effects Stu’ wanted: they have proved perfect for the design. The content images used are much more effects-based than recognisable ‘real’ images; for example, there are scenes you might relate to as a skyline, but they’re not skylines. The result is much more impressionistic, so the viewer will pick up on certain aspects, but the intention is to stimulate their imagination. In that way, it encourages the audience to engage with the performance.”

For the early dates Hogg is supported by Rob Stansfield: “Rob is an LED panel specialist,” explained Video Design MD Alex Leinster. “We put him in there as this is an unfamiliar product and we didn’t want anything to distract Julien from his core creative function.”

It appears Hogg is already happy with the performance of the equipment, “We will shortly take the rigging and running of the video system in-house. Basically, I and the core A-ha crew will run the job and this will become a dry-hire. It’s been made possible for us to do that because of the way Video Design prepares their equipment and packages it. In fact, it’s so well done it’s almost impossible to get it wrong. All told they are a pleasure to work with.”