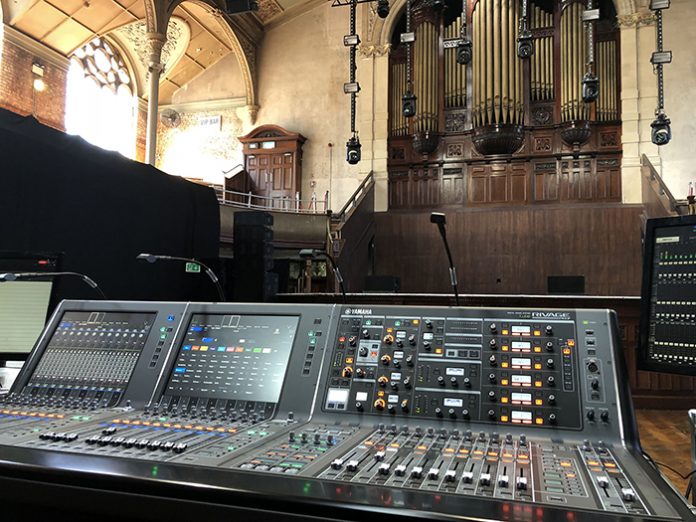 tube’s Melvyn Coote commented: “We’re always excited to be among ‘the first’ to utilise new technologies and are delighted to be THE very first company in the UK with a PM7!”

The powerful and flexible Yamaha RIVAGE PM7 fills a gap in the product range left by the iconic Yamaha PM5D, which was launched in 2004 and swiftly became a touring industry standard for digital live mixing and the go-to interface for a raft of top engineers worldwide.

“We always said that when a PM5D replacement hit the market we would buy into it because the history of that product is legendary, and we continue to have great results from other Yamaha products” explained Coote. “We really believe that the PM7 will prove itself as an equally awesome product!”

Yamaha initially arranged a hands-on demo day for around 60 high end engineers at Abbey Road Studios in London in March where they could use Yamaha’s RIVAGE systems in situ and get a good idea on the functionality and quality on offer.

“All the feedback we were hearing from both of these sessions was extremely positive … so these considerations taken on aggregate added up to it being the right product, right time and right place!” enthused Melvyn.

The Yamaha PM7 has been packaged with an RPio622 I/O stage rack – designed specifically for the RIVAGE family of digital mixing systems – which is currently loaded with four 16-way input modules, one 16-way output module and a 16-way input / output AES module.

“That’s a great range of quality preamp choices,” stated Cootes. The inclusion of the Neves – which recreate the characteristics of Rupert Neve Designs transformer circuitry and acclaimed SILK processing through Yamaha’s VCM digital modelling technology – show that there has been no compromises in quality. “The 32-bit / 96kHz processing throughout also makes this a great sounding console”.

Cootes also likes the 120-channel count which will service most medium to large productions, together with the 60 mix buses, 24 x matrices, dual stereo mixes, dual cue buses and processing for up to 192 plug-ins. “With this extensive i/o count, it’s been designed to be properly multi-purpose and fit a wide range of audio scenarios.”

“The PM5D in particular has been absolutely bullet proof, so we’re expecting the same of the PM7,” he concludes.