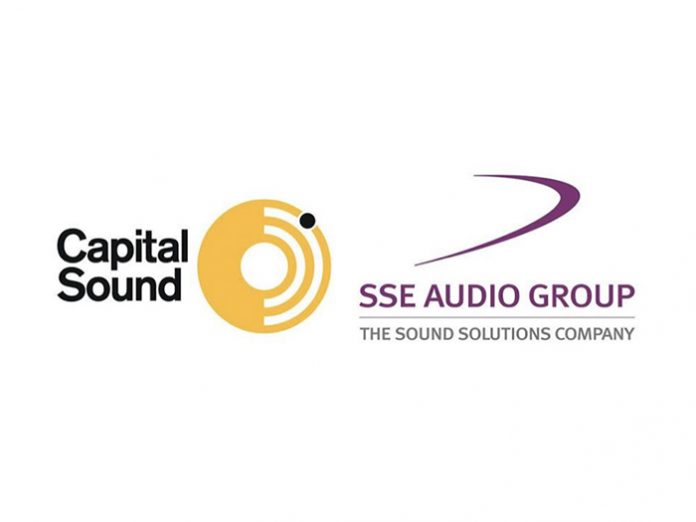 London-based PA rental company Capital Sound Hire has confirmed its acquisition by SSE Audio Group, following a period where the businesses have been aligned through a strategic partnership.

Capital Sound has supplied sound equipment for the touring and festival market for over 35 years. In recent times, the company, has increased the freedom of choice for its clients, adding both d&b audiotechnik and Outline systems to the Martin Audio and Meyer Sound systems that have been the foundations of the company’s hire stock for so many years.

Keith Davis, founder and MD of Capital Sound explained: “We approached John Penn at SSE at the beginning of the year to assist us on a project that required a larger pool of equipment, knowing that we could trust SSE not to nick the gig! Through projects like this we were able to access a larger pool of equipment and talent, and we could offer clients options that were unavailable to us on our own.”

“This has worked out so well that, after many conversations, I asked John if they would be interested in purchasing Capital Sound. I’m not getting any younger and I’ve been wondering about the long term future for Capital for some years. After a lot of soul searching, I realised that SSE was the best bet.”

SSE Audio Group, with headquarters in the Midlands, already has a presence in London, with premises in Park Royal. SSE Audio Group’s rental operation has expanded rapidly over the last decade, with London PA Company Canegreen joining the Group in 2008, followed by the acquisition of the Manchester based audio company Wigwam in 2013.

SSE Audio Group MD John Penn explained: “We now have a clear template for joining forces with other leading players in the industry. With Wigwam, we were particularly keen to maintain its distinctive brand, while providing it with backup and support and that is what we have done.”

Keith Davis added: “SSE’s successful takeover of Wigwam has shown that they will look after the staff and the brand and continue to let the business grow and flourish, which is really important to me and my lifetime’s work.”

Capital Sound will continue to operate as a separate brand, serving its own client base and operating with its distinctive style. However, it will be able to access SSE Audio Group’s resources, including its multi-million pound hire inventory comprising L-Acoustics and d&b audiotechnik systems and the largest rental stock of digital mixing consoles in the UK. In addition, SSE Audio Group offers specialist services including manufacturing, which serve the whole group.

“The acquisition by SSE gives our clients additional brand choices” explained Capital’s Paul Timmins, “but it also gives SSE and Wigwam the scope to provide both Martin Audio and Outline systems as options.”

Timmins continued: “Clients want to work with Capital, but in today’s world we have to provide the first choice equipment on a bid document, the best crew and office support, compact tidy packaging and at a competitive price.

“As part of SSE Audio Group all these factors are strengthened and it really extends our freedom of choice. We have been working closely with SSE for some time on a number of projects. Working together with the teams in Redditch and Manchester has been great. In fact, only today we had an example of the benefits when a console failure at a show in Bolton was dealt with by the Wigwam office and a replacement console was on site within the hour.”

From a management perspective, Keith Davis will remain as a consultant to the Group, while Paul Timmins, currently Capital Sound’s Operations and Development Director, will continue with the day to day management of Capital.

John Penn added: “From a client’s perspective, nothing should change at Capital Sound. We don’t want to mess about with their own formula, but where we can add value through specialisms and of course our pooled equipment we will and I’m confident that Capital will continue to grow and thrive.”

Capital’s Senior Project Manager Martin Connolly commented: “The last 25 years working with Keith have been amazing; I know the company is in good hands with John and Heather Penn. I have big respect for them and I’m looking forward to the new journey; here’s to the next 25 years!”