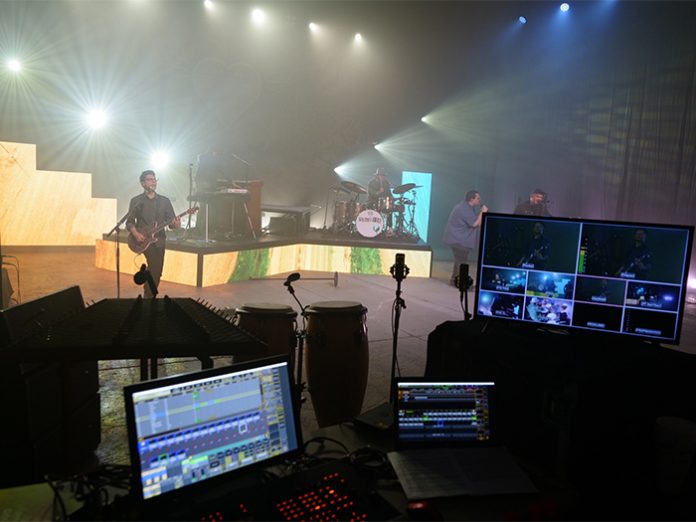 When the live music industry screeched to a halt 13 March due to COVID-19, Sidewalk Prophets, a Christian music band knew they still wanted to reach out to people with a message of love and positivity, courtesy of Bandit Lites.

The group’s tour was revamped for a virtual audience, and rather than stream one show, the band has twelve performances scheduled for free access, if you live within the region of the show, with different set lists played live. “With COVID-19 having such a massive effect on the industry, it was unclear how long it would be before we would play live shows again,” said Production Manager, Robert Mays. “After one phone call with Mike Golden, I knew I had the full support of Bandit and that this show would no doubt be a success.”

“The vision of this project is to find a unique way to connect with our audience through the medium of live stream concerts,” said Rhythm Guitarist, Benjamin McDonald. “The production has really given us a deep pallet to work from in sharing this new musical experience. Working from this pallet, has been extremely helpful during the COVID-19 crisis, and will help us impact the audience in ways we otherwise might not have been able.”

Erik Parker of Chris Lisle Lighting Design originally designed and programmed the lighting for a live audience in large rooms with incredibly dynamic looks, pops of color and blackouts to bring a sense of drama. Now with the band switching gears to a virtual production, things like blackouts did not translate the same way live as they do on screens. “We also were aiming to create a since of space and depth that the show did not have before,” said Mays. “By placing some of the fixtures on the flow truss and spacing them out the show now feels much bigger.”

With a production design originally intended to be adaptable for the wide range of venues slated for the tour, the virtual tour experience features the same design and quantity of fixtures while also expanding on the overall feel of the show.

The truss is configured in a “U” shape with 30ft wide by 30ft deep flown at a 22ft trim height. By adjusting the placement of GLP X4S fixtures to the upstage section of the truss as well as placing Martin by Harman MAC Auras along the downstage legs of the “U” truss fixture, they were able to create a great deal of depth.

Audience members are given the full scope and originality of the production, modified to the streaming medium, compounded with the option to watch the show in 3D. Bandit Lites aimed to deliver the tour’s needs, no matter the circumstances surrounding the change, relying on the Bandit Standard of excellence in communication and preparation. “Without any question, my experience with Bandit has been positive,” said Mays. “From the first conversations about the show, through the design and buildout stages, the Bandit team has and continues to go above and beyond.”

“We are very proud to be working with Sidewalk Prophets,” said Bandit Lites Vice President Mike Golden. “Our relationship began on February 5th with a phone call from Erik Parker regarding gear rental and four days later their rig had been prepped, built and the band was in full show rehearsal in Bandit’s Venue One facility. They were scheduled to be out though the spring until the virus hit, bringing the spring tour to an early end, so I was extremely thrilled when Robert Mays called me with the hope of putting together a package for this June tour project. Although there were a few hurdles to overcome, Robert and the team at Sidewalk Prophets found a way to make this happen. Their entire organisation has been outstanding to work with and I wish them the absolute best on this upcoming tour.”

Mays concluded: “Bandit is a large company that caters to the biggest names in entertainment and music industry and I can say the Bandit staff made me feel like I was the number one concern on their list.”