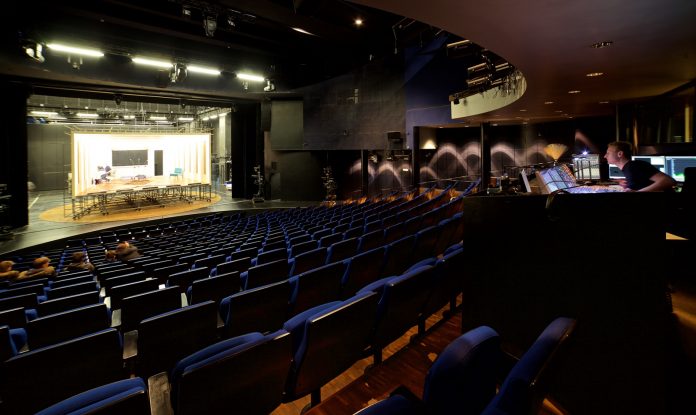 The Schauspiel Hannover, part of the Niedersächsische Staatstheater Hannover GmbH, offers the audience theatre, entertainment and music in five different venues. In addition to the Schauspielhaus on Prinzenstraße near the main station, these are the Cumberlandsche Bühne, the Cumberlandsche Galerie as well as Ballhof Eins and Ballhof Zwei in the old town.

After the sound mixing desk had been renewed in the Schauspielhaus two years ago, the next logical step was the modernisation of the main and back-stage sound system.

The Schauspiel Hannover serves a wide range of performances and reinforces them as needed. While in simple theatre performances only sounds are played, readings, concerts and quite specifically current multimedia performances with a high portion of techno demand more PA performance.

“In general we are seeing an increasing demand for microports in theatre productions”, said sound engineer Markus Folberth. “The demands of the various productions, as well as the guest events in the house, are already described as very “mature”.

With regard to the modernisation of the sound system, the sound engineering department wanted first and foremost a homogeneous coverage of the entire auditorium as well as good speech intelligibility, because the previous point source solution had shown weaknesses in this case. “In addition, the old system audibly reached its limits in music productions and then quickly sounded fatiguing,” said Lutz Findeisen, Head of the sound/video department at the Schauspiel Hannover. “The staff of the sound department wanted to find their musical sonic tool. We were looking for a real extension of the expressive possibilities of the sound reinforcement.”

As usual in the theatre, it was also important to integrate the new portal sound system as inconspicuously as possible in the building, so that stage designers are minimally restricted in their design freedom. The set-up times for the employees should also be kept as short as possible.

For back-of-stage per side each 2x Alcons RR12 pro-ribbon point-source arrays and a BF362 subwoofer is used. All systems are powered by a total of six Sentinel10 4-channel amplified loudspeaker controllers. For mobile use, there are a further 4x Alcons VR12 monitor, 4x Alcons VR5 mini-monitor, 2xAlcons BF362 subwoofers, two Sentinel3 and one Sentinel10 amplified loudspeaker controllers available.

The entire sound engineering team was involved in the decision-making process. “We agreed that Alcons could cover the widest range of productions”, explained Findeisen. “In addition, we noticed positively that the pro-ribbon drivers never sound harsh, even at high sound pressure levels. The Alcons systems have an unobtrusive directness – a sympathetic, natural resolution in speech and music. So we can create the sonic proximity to the events that we had wished us in advance. The compact design and appearance were also convincing.”

After the tendering and awarding procedures, the Alcons system was finally installed and commissioned by Thomann Audio Professional at the end of January 2019. “Working with Thomas Dürrbeck from Thomann Audio Professional was very cooperative. On the first day, we completely removed the old PA and reinstalled all the hardware. During the rehearsals on the following two days, Thomann discretely pulled and put on cables so that we could do the hand-over at the end of day three” recalled Markus Folberth. “During calibration on the 10th of February, we made small angle corrections and optimised the response. Now all participants are more than satisfied with the quantum leap. The actors are also happy about the improved sound quality and speech intelligibility. Specifically, the precise projection has surprised many performers positively. We as sound engineers can offer precise monitoring accordingly.”

Particularly exciting were the running productions, where one had to change from one system to another completely different sound system. “Basically, the changes were less complicated than expected. There were no big level changes in the overall mix required. However, you can hear a lot more detail now. Frequently, reverberation has to be reduced or filters have to be removed” said Folberth. Lutz Findeisen added: “You literally hear every dB of change in the truest sense of the word!”