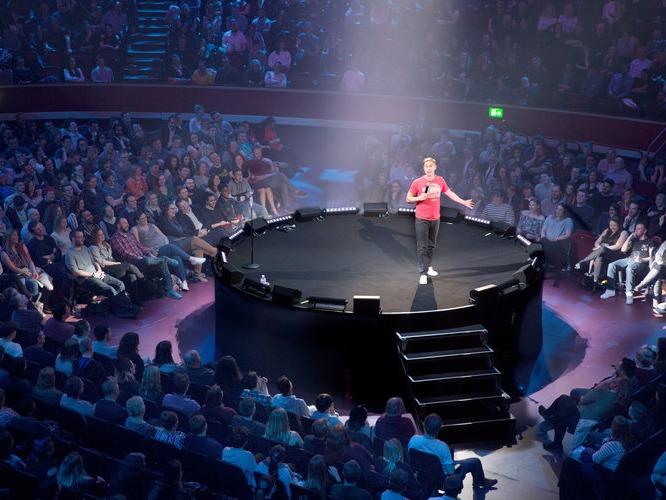 The critically acclaimed British comedy star, Russell Howard, is clearly in record-breaking mode at the moment with his biggest global tour yet, “Round the World”. He recently completed a sold-out 10-day run at the Royal Albert Hall, smashing the record for consecutive performances at the venue previously jointly held by Frank Sinatra and Barry Manilow. The same show also took the record for the largest number of EM Acoustics HALO-C elements – 110 in total – for a single show. System design and equipment supply was courtesy of RAH veterans, Dave Shepherd (who acted as system tech) in conjunction with Delta Sound.

Delta Sound’s senior project manager and sound engineer, Stephen Hughes, explained that the “Round the World” tour wasn’t just named for its global reach, but also for the fact that the entire show is performed in the round, and therefore the production required a sound design capable of meeting those requirements. They turned to Delta Sound thanks to their long-standing experience in the venue.

“Our extensive use of HALO-C for all our other configurations in the venue, not to mention the fact that it is now the RAH’s installed PA system, made it a natural choice for the final system design,” said Hughes. “The use of low-flying screens and pyrotechnics added to the challenge of making a 360-degree experience sound crystal clear, despite the competing technical resources in the air and the venue’s famously challenging acoustic. However, HALO-C is renowned for its laser precision and accuracy and we are very experienced in the venue, so we were confident that we could make it work and sound fabulous.”

The final design deployed 110 boxes of HALO-C distributed across six hangs of sixteen cabinets each, with a smaller array of six boxes to cover the seated auditorium stage and four boxes per side to cover the choir stalls. The entire show was powered from eight EM Acoustics DQ20 amplifiers, which were rigged in the roof of the hall, with cable management dropping directly down alongside the PA motor points for the shortest path between amp and speaker, and giving the hangs the cleanest possible look.

“I’m pleased to say that the HALO-C performed exactly as expected,” concluded Hughes. “Up to 50,000 audience members came to see this show over its record-breaking run of ten days at the Royal Albert Hall, and HALO-C ensured that every joke landed perfectly.”