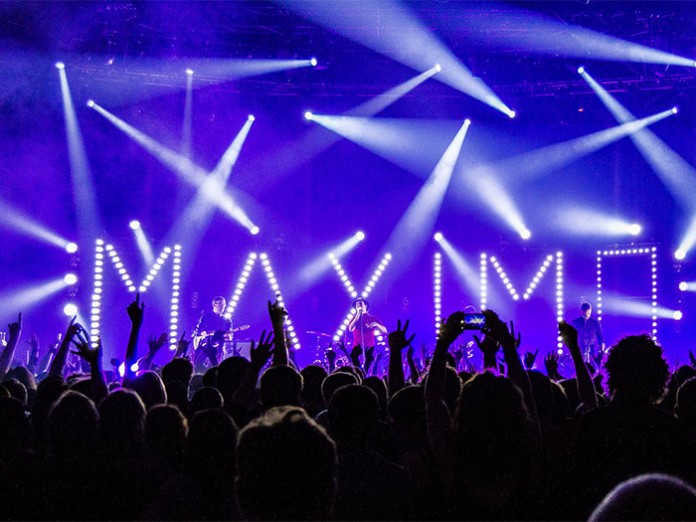 To celebrate 10 years since the release of Maximo Park’s seminal debut studio album, A Certain Trigger in 2005, which was nominated for the Mercury Music Prize, lighting designer Olly Suckling created a giant illuminated M-A-X-I-M-O sign upstage on the group’s most recent tour, using 28 of Robe’s CycFX 8 LED battens.

This high impact visual effect was part of Suckling’s first design for Maximo Park, for which he toured a neat and flexible floor package comprising 59 fixtures, 46 of which were Robe, all supplied by rental company R & M Productions from Stokesley, North Yorkshire.

The Maximo letters utilised six of Robe’s CycFX 8’s for the two Ms and the O, four for the A and the X, and two for the L, all of which were out rigged from aluminium pipes standing in heavy-duty tank trap bases.

In addition to the CycFX 8’s, Olly also specified 12 Robe LEDBeam 100’s and six Robe LEDWash 600’s. The LEDBeam 100’s were dotted in and around the top and sides of the letters, and together with blinders and strobes they were then clamped to the aluminium pipe structure. The LEDWash 600’s were located on the floor with three on each side of the stage for cross lighting the band during the vibrant and energetic show.

Olly likes Robe’s CycFX 8’s, and describes them as “good all-round LED batten, with no compromises on colour mixing or dimming”. His favourite feature is Robe’s tungsten emulation, which was used heavily throughout the Maximo show. He is also impressed with the punch and the beam of the little LEDWash 100’s as well as their reliability and is always fascinated with the way – for their size and weight – they “hold their own even in larger venues”.

Olly first encountered Robe whilst working at Liverpool Academy back at the start of his industry career. “I like Robe as a brand and especially how it values LDs, and its opinions and how it keeps in touch with the community. I believe Robe’s products are the best on the market right now in terms of reliability and quality.”

As a freelance LD based in Stoke on Trent, UK, Olly first became interested in lighting at college where he worked as a theatre technician before studying Theatre and Performance Technology at Liverpool Institute of Performing Arts (LIPA). After graduating, he cut his teeth as a live designer and operator at Liverpool’s Academy venue, leaving there in 2013 to concentrate on his touring work, which has also included Wild Beasts, Temples and Hadouken.