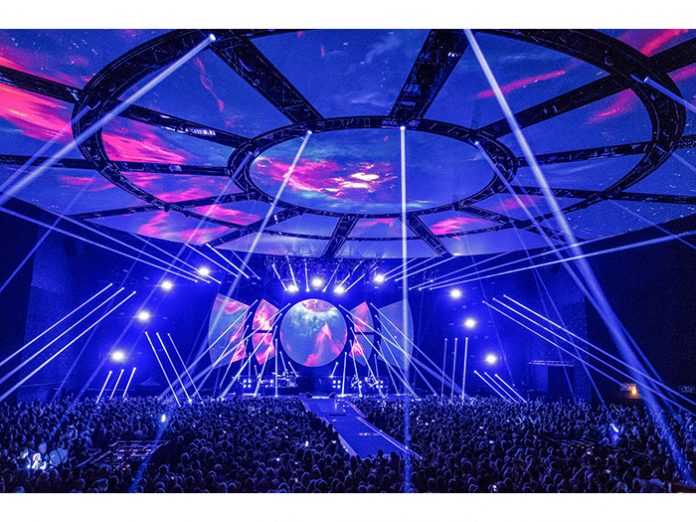 Each Robe RoboSpot operator positioned behind the stage controlled 2 Robe BMFL WashBeam moving lights running in conjunction with 2 RoboSpot MotionCameras. The compact moving head cameras were rigged in front of the BMFLs on a ‘magic arm’.

While 3 Robe BMFL WashBeams being used as follow spots were positioned on the front truss and the other three on the central ring of a large circular video ceiling installed over the audience.

Kevin Migeon from Robe France arranged RoboSpot demonstrations and tests for Dechandon to ensure that everything he wanted to do was viable. Throughout the tour, he also communicated the operators’ feedback to Robe’s R & D team in the Czech Republic, who are constantly monitoring and developing the system software in response to the user requests.

“We wanted numerous projections, so I was looking for a product powerful but small enough to be concealed and not compromise the video,” said Dechandon, so 48 Robe MegaPointes were positioned around the screens, with 24 around the upstage surface and 24 on the audience circle.

As the screen structures themselves were quite heavy, the lights had to be light as well as small, at 22 Kg – producing an impressive 2,200,000 lux at 5 metres – the Robe MegaPointe fitted the spec perfectly.

A 120 Robe LEDBeam150s were positioned in and around the Robe MegaPointes to bring extra volume to the stage.

“Here we needed a small source that could be used in large numbers to open up the stage,” stated the LD. With ceiling trim heights varying between about 16 / 17 metres up to 30 metres, they wanted those ‘point-source’ fixtures to be able to stretch and scale the visuality of the stage.

The 40 Robe Spiiders were also chosen for their size / power ratio and were positioned in three places. Eleven upstage in the background reinforced the depth of the set, five were on the rear truss to light the stage and band. The remaining 24 fixtures were all rigged on the circular audience ceiling, where they were great for illuminating the audience and engulfing the whole venue in colourful atmospheres connecting band, audience, lighting and video.