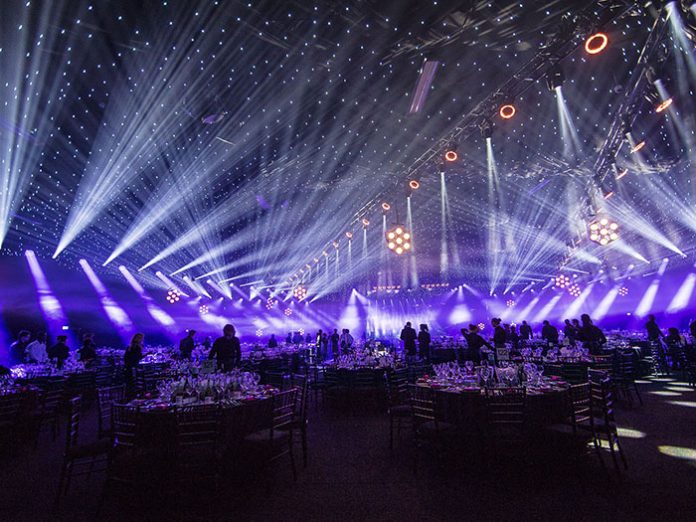 Almost 300 Robe lighting fixtures were used to illuminate the 2017 TPi Awards at Battersea Evolution in central London.
Robe used the opportunity of being in front of the entire industry to launch a brand new lighting fixture, the pixelPATT, which features 7 x 30W RGBW LED multi-chips, one in the centre surrounded by a ring of six, housed in a super-slim and lightweight brushed metal frame.
20 x pixelPATTs graced a spectacular lighting rig designed by Nathan Wan, together with other new fixtures including the Spiider LED wash beam, the Spikie, and favourites like Pointe, ColorStrobe and DL7 range profiles and fresnels.
The starting point for the lighting design was the shape of the screen / set created by FIX8Group.
A large V-shaped truss was at the centre of his idea, and this zig-zagged across the room maximising the headroom and the 40m width, adding an architectural look and context that pulled the 1,450 guests into the action.
To get some height variation, 16 of the 20 x PixelPATTs were hung on drop arms off these V trusses, with another four flanking the stage each side on floor stands. The distinctive flower like shape was great eye and camera candy, and they became the signature look of this year’s show.
The pixels are all individually controllable, which means there is great potential for mapping effects.
Another new piece of Robe technology was the Halo pixel ring, of which there were 42 in total fitted onto the front of Robe PARFect 100’s. Another 12 on a front truss pointed into the audience, complimented by the other 28 hung on the two runs of the central V truss, also on drop arms.
The Halo rings were run via inbuilt macros created by Robe giving a mellow rippling kinetic effect greatly adding to the dining atmosphere.
Wan explained that the challenge with this format of events is always producing a comfortable environment for the dinner section of the evening. “Guests need to be able to see their food and each other, but you have to ensure it’s also intimate and cosy – it’s a lot more complex than it sounds!” The workhorse lights were 54 x Spiiders, which were dotted all over the trusses to create a pleasant tungsten look during the dinner.

When the Awards started, they swept across the massive room with big bold colour looks. Forty-two Pointes were also deployed on the trusses, used for all the effects and sharp gobo work to compliment the Spiiders. “You can never run out of unique and interesting combinations with Pointes,” said Wan.
A total of 60 x Spikies were deployed, with 18 for the stage, nine on a truss above and nine in a line upstage on the floor for dramatic aerial beam work. The majority were on the main V truss where they were ideal for whizzy room effects.
The 20 x ColorStrobes were rigged on the over-stage trusses and the side V truss spans, bringing high-impact to the visual picture, while being bright and powerful enough to hold their own against the big LED back screen.
Last but by no means least was the all-important key lighting and for this Robe’s DL7S and DL7F LED luminaires, positioned on the front truss, were chosen for their great colour temperature, highly accurate tuneable white ranges and flesh tones.
All this was controlled by an Avolites Arena console running the main moving and effects lights and a Tiger Touch II for all the keys and camera lighting.
Wan and the FOH team, comprising assistant LD Kieran Hancox and lighting director Andy Webb, worked closely on site with Evolution’s house lighting supplier Hawthorn and its project managers Tom Ring and Paul Bird who were “fantastic”, according to Wan.
In addition to supporting the show, Robe’s UK and international teams and their guests – occupying seven tables – enjoyed a fantastic evening and Robe again sponsored the ‘Favourite Lighting Rental Company’ Award, which was presented by CEO Josef Valchar and won for the fourth consecutive year by Neg Earth Lights.
Other winners of the night included Fredrik Jönsson (Lighting Designer of the Year), Rob Sinclair (Set Designer of the Year), Ola Melzig (Production Manager of the Year) and Oli Metcalfe (Des Fallon Video Visionary Award), while the Royal Albert Hall won the ‘Favourite Venue’ category. Entec director and head of lighting Noreen O’Riordan won a well-deserved ‘Lifetime Achievement’ Award for services to the industry.
The TPi Awards also remembered the too many ‘absent friends’ who departed in 2016 in a fitting celebration to their incredible characters, lives and contributions to the industry.
Valchar stated: “We were delighted to support another amazing TPi Awards and catch up with so many friends and colleagues. The event continues to grow, develop and we are very proud to be part of honouring the companies, individuals and innovators who have so much passion, commitment and imagination that are driving our industry forward.”