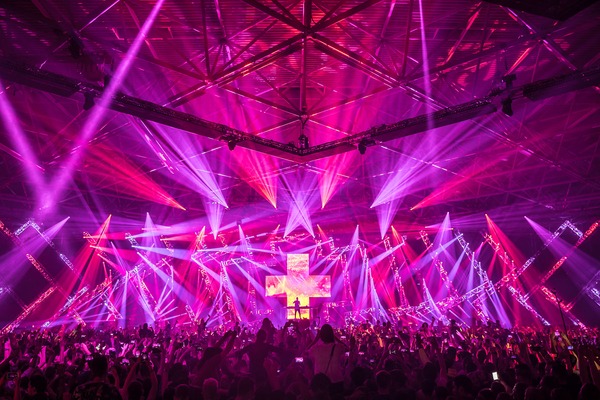 Nearly 300 Robe moving lights featured on the rig, including 50 brand new Robe MegaPointes. The RAI design was created by Gabe based on a new live show concept that was launched at the Bill Graham Auditorium in San Francisco in May 2017, flanked each side by a matrix of 90 Robe Spikies.

A 10m high structural trussing design repeated the shape of the central ‘plus’ to each side, giving it a 45° twist. Fraboni worked with Designer Bart Stravar on this element of the production, which was constructed from 30 cm trussing and a selection of corner blocks.

Fifty Robe MegaPointes were rigged on 3 curved trusses that complimented the architecture of the trussing structure and lined the upstage video wall, while the structure’s metal work elements, consumed 164 Robe Spikies.

Fraboni programmed 164 Robe Spikies with 136 ‘dummy’ fixtures, so the grandMA2 could produce perfect maths to make the dynamic liquid Spikie effects pulse, bounce and ripple across and around the structure. Above the audience, 60 Robe Pointes were deployed which worked smoothly with both the Robe MegaPointes and the Spikies.

“He gives me a free rein as show designer, and working in close collaboration with Lorenzo, we establish the individual looks, which then are presented to Martin. Once approved I liaise with the rest of our team to compile all the materials,” explained Gabe.

The pyro design and operation is executed by Bert Kelchtermans who is also the tour’s production manager and the SFO operator and tour manager is Aubrey Wright. Audio is mixed by Stephan Themps.

The Amsterdam show was promoted by E&A Events, and the Martin Garrix touring production crew including Amanda Barker liaised closely with a local production team managed and coordinated by Iko Claassens and Ronnie Santegoeds.