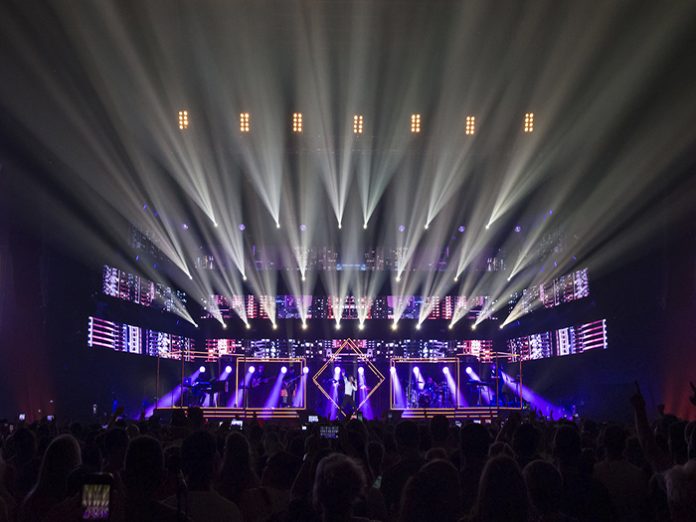 Barcelona based lighting designer Ezequiel Gomez has enjoyed working on Spanish singer David Bisbal’s latest Hijos del Mar tour. He chose Robe for the majority of the moving lights with Spiiders, Pointes and LEDWash 300s as key fixtures on the rig.

The stage and scenic design for this tour was a collaborative between the Bisbal himself, Brian Sellei from Menos que Cero, Universal Music, Barcelona based LED specialists LEDSCONTROL and performing arts collective SomosLuz (We Are Light), of which Ezequiel is a member. LEDSCONTROL presented the initial ideas from which the stage look evolved, coming up with an idea to have partially enclosed LED ‘cabinets’ for the band risers.

Ezequiel and his team at SomosLuz adapted this and made it a tourable concept. The video was created with direct input from David Bisbal by the SomosLuz video department, headed by Lucas Averbuj. The 24 Pointes, 24 Spiiders and 36 LEDWash 300s were positioned on 5 trusses which wrapped around the back and sides of the stage and were also used for rigging a series of 4m wide by 1m high LED video screens. LX 1 was the most downstage of these trusses and LX 5 the most upstage, the latter rigged with the 12 of the Spiiders. LX 4 featured 12 Pointes and LX 2 and 3 were both loaded with 6 Pointes and 6 Spiiders alternating. The LEDWash 300s were all on the side trusses.

The LEDWash 300s were used to illuminate the band from that specific angle, applying colour and density across the stage. Ezequiel loved the LEDWash 300 for its excellent size-to- power ratio. The Pointes – due to the huge range of effects they offer – were used extensively in beam and spot mode for numerous effects. “This fixture is so versatile and durable” Ezequiel said. “Every time I have used Pointes they have been super-reliable and they have all the attributes I need to build a dynamic show.” The Spiiders were specified because “we like the quality of the light and the effects you can get especially from the hexagonal shape of the central LED and the fact it can be used as a scenic effect.”

The overall visual design for the tour was based – and balanced – across these 3 distinctive elements: the strips of video screen, the lighting, and the illuminated LED risers. These worked together to create a coherent visual harmony. “There was a touch of 1980’s retro in this whole aesthetic,” Ezequiel added. “Our designs are not just about effects and WOW factors although they have their place! It’s about bringing dramaturgy and emotion to the stage and sharing and communicating that with the audience.”

He programmed the Hijos del Mar show during production rehearsals with Caco Garcia and operated it himself on the road. Lighting equipment for the Spanish leg of the tour was supplied by Fluge, who have purchased all their Robe fixtures from Spanish distributor EES, and their lighting crew chief was José Miguel Velázquez.