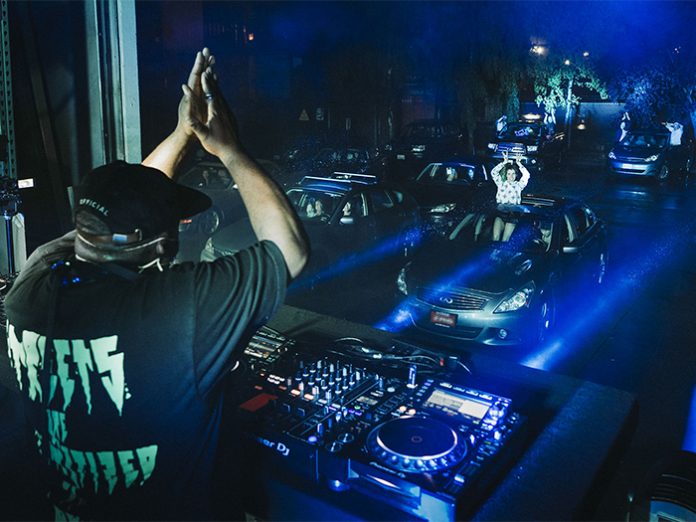 The venue for the inaugural Covert Bat Drive Thru Rave – a smart scientific nod to the “noble winged mammal” in combination with the true spirit of underground rave that kept the first events strictly secret – was R90’s shop on 1st Avenue South, Seattle.

The large loading bay area and a series of roller shutter doors where trucks back up to load gear and enough room to socially distance 21 vehicles so they could have the windows down.

Mahowald’s lighting design was based around how to fill three loading dock bays with flexible lights that would work from the available power supply. All the kit including the sound system – supplied by Jackson for the first few events – had to fit inside the bays, so they could simply flip up the shutters.

With a warehouse full of lighting gear and determination to produce something special for what would be the first proper show since the industry shut down, Cole, Mahowald and Jackson measured the bays, built the venue as a 3D visualisation model and chose lighting positions in a stunning design that “looked great and fit the limited parameters,” explained Mahowald.

This included 15 Robe MegaPointes and 27 LEDBeam150s on the lighting rig. Robe MegaPointes were deployed on the downstage edge of the stage in the central bay for an even spread across the loading dock area, with one more fixture far back inside each bay for high-impact backlight looks and silhouettes.

Mahowald praised MegaPointes, especially the gobo and prism combination that “hits the outer aperture of the fixture to create amazing full looks and intense aerial effects as well as great eye candy,” and R90 has made some large Robe investments in the last couple of years.

Three lighting towers were deployed, one in the centre of each bay, each rigged with nine LEDBeam 150s, and six additional fixtures, with all lights controlled from a grandMA3 console. The first Covert Bat Raves were electronic and EDM-based, so this selection of lights gave endless options for creating multiple big, bold, bright, diverse looks that kept the energy pumping out and immersing the parking lot in the show.

The lineup of local DJ talent included Darrius, Pezzner, Subset and Powermitten covering a range of EDM genres. An experimental acoustic set with singer-songwriter, Glen Cannon, enabled the team to ‘test drive’ a different genre, and as Cole noted, “this set up in general, DJs and acoustic sets are more practical for social distancing and to load in / out than full bands would be.”

While the R90 team are experienced lighting and production professionals, they have now teamed up with some local promoters and started upping the scale and organisation of the events and sourcing larger venues. The aim for the immediate future is to continue facilitating drive-in events on a larger scale, while maintaining the ethos of the initial Covert Bat events – as an alternative grass-roots musical movement of the moment.