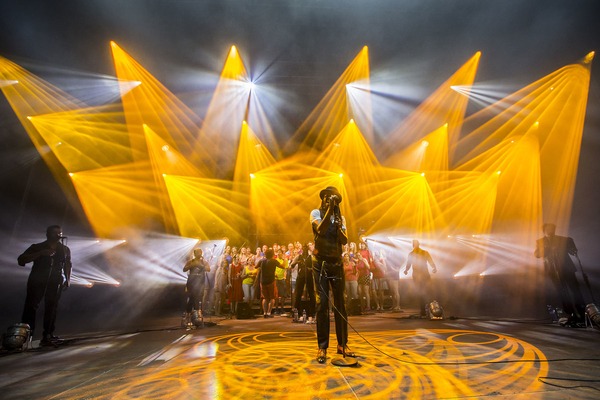 Robe moving lights made a significant contribution to the 2017 Colours Of Ostrava (COO) festival with nearly 100 fixtures utilised to light the ArcelorMittal Stage.

Kamil Kruzik created the design of the stage production while the lights were supplied by oneAVteam, the largest audiovisual rental group in Central Europe. Three companies also cooperated on this project, AV Media, RentalPRO and Yventech.

The annual 4-day international multi-genre festival included 20 performance stages with over 350 live music acts, plus discussions, debates, theatre productions, films and workshops, and is enjoyed by around 50,000 people.

Colours of Ostrava’s technical production is delivered by Smart Productions, a company run by Josef “Pepa” Źenišek, the Technical Director of the festival since 2011. He and his team co-ordinated all the technical elements site wide, often including overnight de-rig and re-rigging on the main stages to accommodate requirements from the headliners together with their ‘specials’ packages.

RentalPRO have been involved in supplying lighting, sound and video to the ArcelorMittal Stage for the last 7 years, and 2017 received a brief from SMART Productions who had scanned all the band riders and compiled a list of requirements, including 26 BMFL Blades, 38 Pointes and 34 Spiiders.

While 18 Spiiders were rigged on the 6 upstage verticals, matched with the 18 BMFL Blades on the same trusses, while another 16 were in pairs taking the top and bottom positions of the floor-based towers (with the pair of Pointes in between). The final 2 were on the FOH Tower for illuminating the audience. The Pointes were used for throwing a myriad of different lighting looks and effects onto the stage and into the audience.

“Robe is now an accepted brand worldwide, that almost everyone is happy to use on their specs,” observed Kruzik, who, together with his crew, lit all the other artists in the exciting and varied ArcelorMittal line-up.

Robe fixtures were also used on other stages including the Main with BMFL Blades and BMFL Wash XFs, ColorStrobes and Pointes; and the Electro stage featured PixelPATTs, Pointes and LEDBeam 100s.