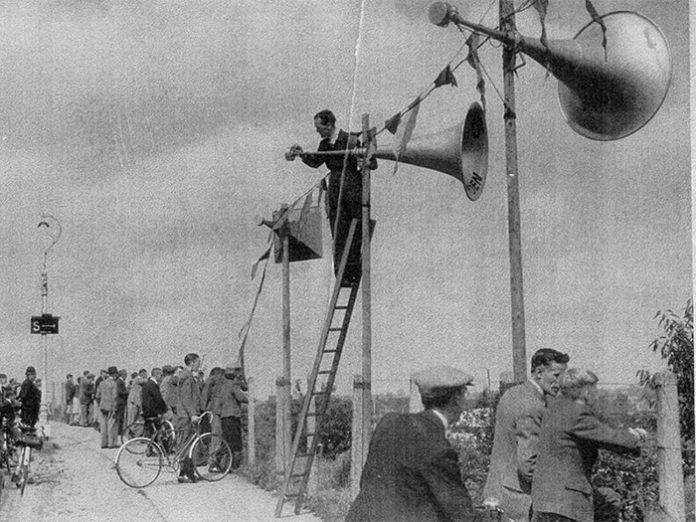 VE Day was an event of particular significance for RG Jones. It is 75 years since RG Jones Engineering founder, Reginald Jones, provided public address systems for the VE Day celebrations in London. It must have been an extraordinary experience to be involved in such a historical event; Britain and her Allies formally accepted Nazi Germany’s unconditional surrender after nearly six years of war.

Fifty years later, in 1995, RG Jones’ crew returned to continue the company’s legacy providing audio for the performance in front of the palace – the massed bands were on the forecourt, the stage was built in the central gate and featured Dame Vera, Harry Secombe and Cliff Richard. FOH was on the Victoria Memorial in the middle of the roundabout, clearly visible in the video.

Long-serving RG Jones veteran Simon Honywill and Robin Jones provided their sentiments. Honywill recalled: “The gig was great – very exciting as the atmosphere was really buzzing and the crowd was massive. The planes flying down The Mall was really memorable. It was one of those moments when you knew you were really involved in something totally unified. Amazing really”.

He explained: “The only way we could make it work was by running the multis and mains under the road. Fortunately, there were ducts in place, but they hadn’t been used for decades and nobody knew exactly where they terminated in the palace forecourt. This resulted in the Royal Ferret Handler being summoned – true story! He came along with his ferrets and sent them down the ducts with a draw line attached to their harnesses. His colleague waited in the forecourt to see where they appeared and caught them. One of the ducts was blocked so were only able to use one. This ultimately meant the only way we could get signal between FOH and the stage was by removing the connectors from the 12 pair Soca multis, running them through and then re-soldering them.”

Four stacks of Renkus CE3T were placed on towers along the forecourt railings to cover about 500,000 people; it worked if you were within about 75m of the fence. Honywill said: “The biggest surprise was during the site visit. Myself and Sue Banner (show caller and general legend) went to a meeting at the Palace with Major Sir Michael Parker. Because we went in with him we waltzed through security as if we lived there, and were led up to the Japanese Room, where there was a large table and loads of beautiful Japanese furniture and art – not surprisingly. We discussed the way the thing would work, and then came the appearance of the Royal Family on the balcony for the crowds and the flypast.”

He continued: “It became obvious that we were going to have to get some form of monitoring up to the balcony for them to know what was going on, and Michael then said ‘well take a look Simon’ and threw open the doors that were behind some heavy curtains and pushed me through, closely followed by Sue. We were standing there, on the very same balcony where they have all stood since Buckingham Palace has been there, both of us initially like rabbits in headlights, but very soon we were waving to all the tourists who were cheering and shouting back. Hilarious! The upshot of this was Tim Meyer scaling the front of the Palace like a burglar, traversing the front wall in climbing harness with a cable for the monitor. Any other occasion he would have been shot.”

Reginald’s son Robin Jones took over the company after his father passed away in 1987. Robin has been instrumental at curating our history archives and has also been transcribing records from the sought after Oak Records; a highly collectable record collection created by RG Jones Studios.

Jones recently transcribed audio for a client from a 78 of the Loafers Dance Band; recorded by RGJ in March 1945 at a victory celebration dance at the old Epsom Baths (they boarded over the baths to turn it into a dance hall). Jones concluded: “My father also provided sound reinforcement for C.O.L Military Band Lunch Hour Concerts held on steps of St Pauls’ Cathedral during war to raise morale. The concerts were so popular they continued every Thursday many years after the war ended; into the late 1990s”.