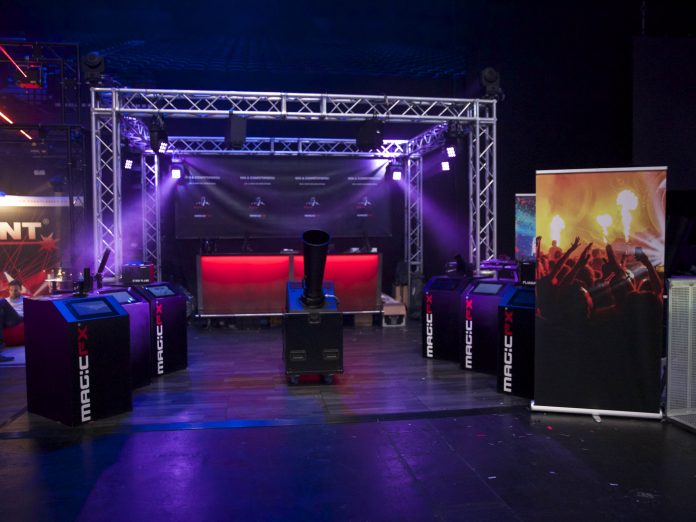 When James Priddle, sales and project manager for Pyrojunkies, needed a console to programme a special effects show for the 2016 BPM | Pro trade show in Birmingham. Ambersphere Solutions recommended the MA Lighting dot 2 console. The only consideration being which model, as Thor André of Ambersphere’s Technical Sales described, “I spent a lot of time with James, looking at the various different options and how they could best work for him, and we eventually settled upon a dot2 Core.” Priddle explained further: “We wanted to create a show that had the feel of a concert. We achieved this by using a large, high-definition screen, a crowd barrier and using a combination of special FX including CO2 jets, power jets, smoke jets and confetti pistols.”

Priddle was impressed with the desk and found it invaluable during the show. He said: “We used QLab to generate timecode and trigger the show with the dot2 being used to run the 500+ cues in various stacks. The small form factor of the desk helped us dramatically as we are normally confined to one control case in a very restricted area, so space can sometimes be an issue. The dot2 was just the right size as it could sit perfectly in front of my iMac, which runs the show files and QLab.” The effects show was a success, with the dot2 handling all the cues effortlessly. Priddle continued: “We encountered a few problems during the show, but we had spent a lot of time with Thor and the Ambersphere team making sure that the profiles for the effects were perfect, so we were able to solve any problems easily. The support we had from Ambersphere cannot be faulted. Thor was always just a phone call away and was able to help me with the most trivial of issues.” André himself added: “It soon became clear that the dot2 was the perfect choice for Pyrojunkies. The fact that they put together a 3½ minute time coded show with more than 500 cues in less than a week says it all, really. My only regret is that I didn’t get the chance to see the show in person, however, seeing the video was impressive in itself.”

Priddle concluded he would continue to use the dot2 on future projects, commenting: “It’s a great console, which runs everything for us, which is nice.”